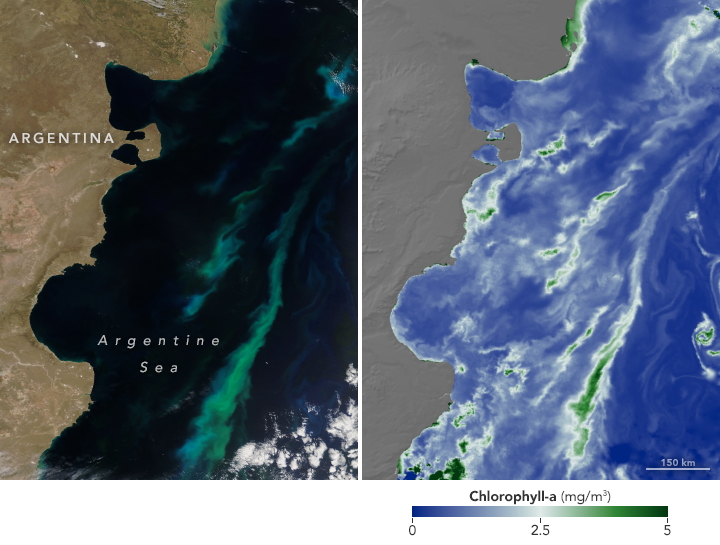 The Moderate Resolution Imaging Spectroradiometer (MODIS) on NASA’s Terra satellite captured a natural-color image (above left) of the bloom on December 17, 2018. The right image shows Terra observations of concentrations of chlorophyll-a, the pigment used by phytoplankton to harness sunlight and turn it into food.

These plant-like floating organisms form the center of the ocean food web, becoming food for everything from microscopic animals (zooplankton) to fish to whales. They are key producers of the oxygen that makes the planet livable for humans and other creatures. And they are critical to the global carbon cycle, as they absorb carbon dioxide from the atmosphere and turn it into carbohydrates. When the phytoplankton die (or animals eat and excrete them), some of the remains sink, carrying carbon to the bottom of the ocean.

The milky green and blue bloom developed along the continental shelf, where warmer, saltier coastal waters and currents from the subtropics meet the colder, fresher waters flowing from the south. Where these currents collide—known to oceanographers as a shelf-break front—turbulent eddies and swirls form, pulling nutrients up from the deep ocean.

The aquamarine stripes and swirls are coccolithophores, a type of phytoplankton with microscopic calcite shells that can give water a chalky color. The various shades of green are probably a mix of diatoms, dinoflagellates, and other species. Previous ship-based studies of the region have shown that Emiliania huxleyi coccolithophores and Prorocentrum sp. dinoflagellates tend to dominate. Scientists are working to identify types of phytoplankton from satellite images; hyperspectral imagers planned for future satellite missions should make that easier.