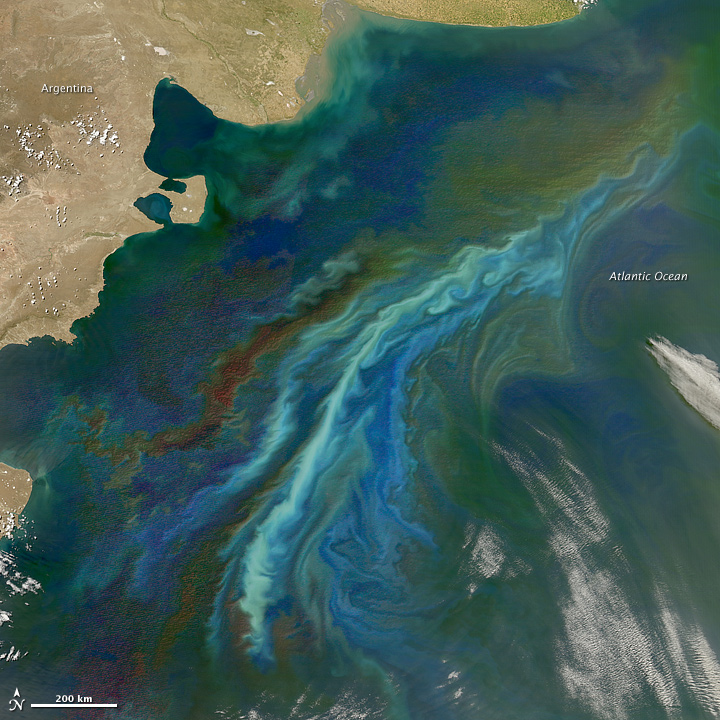 The most interesting art often arises from the convergence of different ideas and influences. And so it is with nature sometimes. Off the coast of Argentina, two strong ocean currents recently stirred up a colorful brew of floating nutrients and microscopic plant life just in time for the summer solstice.

The Moderate Resolution Imaging Spectroradiometer (MODIS) on NASA’s Aqua satellite captured this image of a massive phytoplankton bloom off of the Atlantic coast of Patagonia on December 21, 2010. Scientists used seven separate different spectral bands to highlight the differences in the plankton communities across this swath of ocean.

This milky green and blue bloom developed on the continental shelf off of Patagonia, where warmer, saltier coastal waters and currents from the subtropics meet the colder, fresher waters flowing up from the south. Where these currents collide—known to oceanographers as a shelf-break front—turbulent eddies and swirls form, pulling nutrients up from the deep ocean. Also, the nearby Rio de la Plata runs off the land and deposits nitrogen and iron-laden sediment into the sea just north of the area shown in the image.

Add in some strong summer sun, and you have a bountiful feast for the microscopic, floating plants—phytoplankton—that form the center of the ocean food web. Those plants become food for everything from microscopic animals (zooplankton) to fish to whales.

Though it is impossible to say for sure without direct sampling of the water, most of the phytoplankton blooming in this photo are likely coccolithophores, single-celled plants that form calcite scales. (Calcite is a carbonate mineral often found in limestone chalk.) Blooms of coccolithophores are common in those waters in southern hemisphere's spring and summer. Diatoms might also be in the mix.