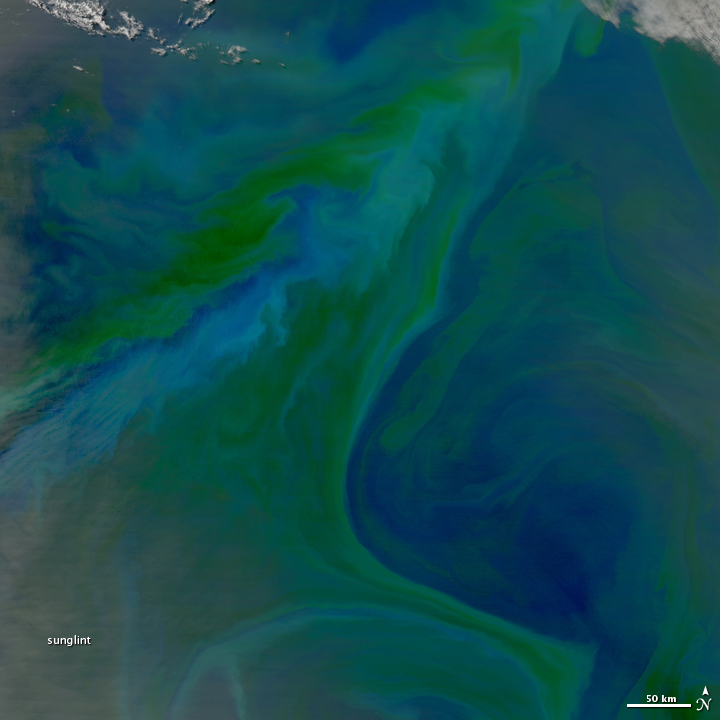 In the South Atlantic Ocean, nestled in the curve of southern South America, things are about perfect for microscopic ocean life. Tiny, plant-like organisms—phytoplankton—thrive throughout the Southern Hemisphere’s spring and summer on an abundance of nutrients and long hours of sunlight. Many different species of phytoplankton were coloring the ocean’s surface on January 9, 2010, when the Moderate Resolution Imaging Spectroradiometer (MODIS) on NASA’s Aqua satellite captured this photo-like image.

Each type of phytoplankton and other material in the water absorbs and reflects light differently. Coccolithophores are microorganisms that are covered in plate-like shells made out of calcium carbonate (chalk). The chalky shells reflect light, turning the ocean a milky turquoise color. Very common in the South Atlantic bloom, coccolithophores are probably responsible for the milky blue color in this image. Phytoplankton, on the other hand, contain chlorophyll for photosynthesis, which gives them a green color. The water may also contain dust, sediment and other material washed out to sea from South America’s rivers or brought to the surface by the clashing currents and nearby continental shelf. Sunlight reflecting off the surface of the water is turning the water’s surface silver in the lower left corner.

Though this image covers hundreds of kilometers, it shows only a portion of the entire bloom. The South Atlantic’s annual bloom regularly measures more than 1,000 kilometers. Because plankton are the base of the marine food chain, the South Atlantic Ocean supports a rich marine ecosystem.

Many environmental factors come together to make the South Atlantic ideal for this large annual bloom of millions of microorganisms. First, the chilly Malvinas Current, a north-flowing branch of the Antarctic Circumpolar Current, flows north along the edge of the South American continental shelf. The current brings cool, nutrient rich waters north. Water also rises to the surface along the edge of the continental shelf, bringing additional iron to sunlit waters. Finally, the Rio de la Plata deposits nitrogen and iron-laden sediment into the ocean just north of the area shown in the image. All of these things contribute to the nutrient-rich environment needed to sustain such a large bloom throughout the spring and summer.