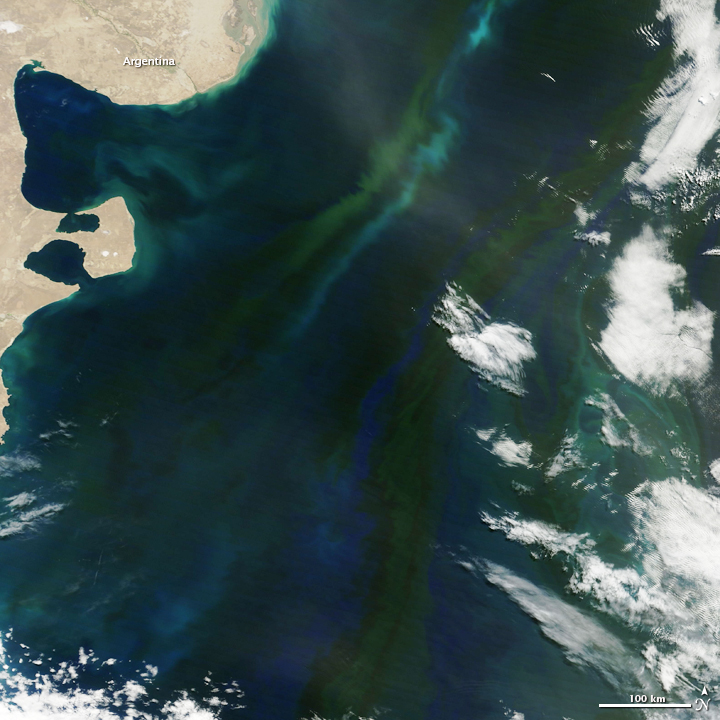 The South Atlantic Ocean off the coast of Argentina looked as if a giant peacock had spread its tail over the ocean waters on November 15, 2009. The color that streaked across the ocean matches the intense shades of blue and green that a peacock claims as its own. In this case, the color is from a large phytoplankton bloom.

Phytoplankton are plant-like organisms that live in the surface waters of the ocean. They grow best in cool waters, where the temperature difference between the surface and the ocean’s depths is small enough to allow nutrient-rich deep water to mix with surface waters. A few different factors may be contributing to the bloom seen in this image. First, a cold current sweeps north from Antarctica along the coast of Argentina. Second, winds often drive upwelling along the continental shelf. Both the current and upwelling chill the South Atlantic in this region, making it possible for nutrient-rich deep water to reach the surface.

With access to nutrients and increasing springtime sunlight, phytoplankton thrive, developing into large blooms. There are probably many different kinds of phytoplankton growing in the waters off Argentina, accounting for the wide variations in color. Phytoplankton are the base of the marine food chain. Regular blooms such as this one make coastal Argentina a rich fishing ground.

The Moderate Resolution Imaging Spectroradiometer (MODIS) on NASA’s Terra satellite captured this image. The large image is the highest resolution version of the image. The MODIS Rapid Response System provides the image in additional resolutions.