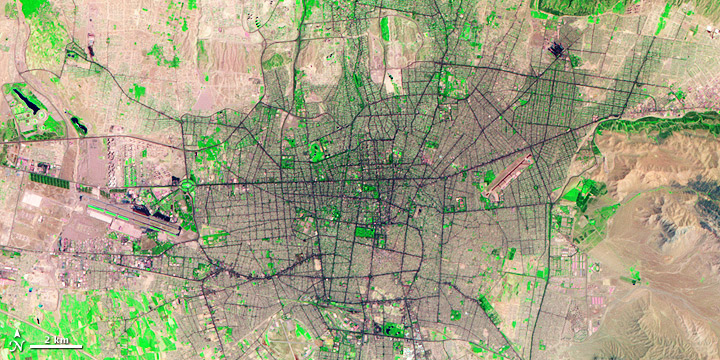 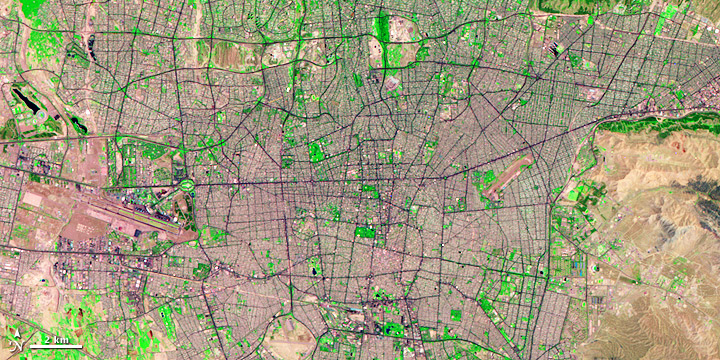 Tehran, Iran’s capital, ranks among the world’s fast-growing cities. In the early 1940s, Tehran’s population was about 700,000. By 1966, it had risen to 3 million, and by 1986—during the Iran-Iraq war—migrants brought the population to 6 million. Today, the metropolitan area has more than 10 million residents, more than the sum of the country’s next five major metropolitan areas combined. This explosive growth has environmental and public health consequences, including air and water pollution and the loss of arable land.

The Thematic Mapper sensor on NASA’s Landsat 5 satellite acquired these false-color images of Tehran on August 2, 1985 (top), and July 19, 2009 (bottom). In both images, vegetation appears bright green, urban areas range in color from gray to black, and barren areas appear brown. Whereas non-urbanized areas fringe the earlier image, urbanization fills almost the entire frame of the later image. Major roadways crisscrossing the city in 1985 remain visible in 2009, but many additional roadways have been added, particularly in the north.

Tehran sits on a gradually sloping plain between the Alborz Mountains in the north and the Great Salt Desert in the south. The city has been populated for thousands of years. It began as a village outside the ancient city of Ray, sitting at the intersection between the east-west Silk Road, and the north-south route between the Caspian Sea and Persian Gulf.