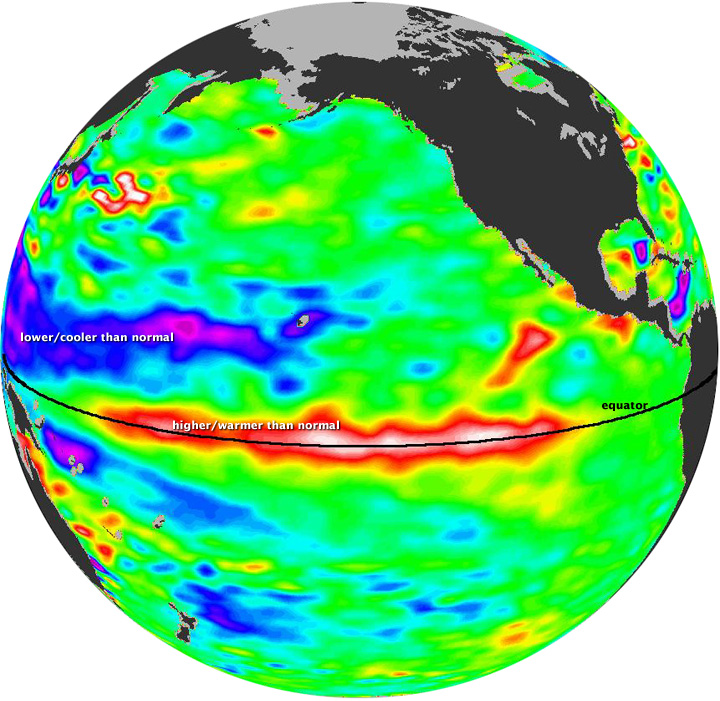 El Niño is experiencing a late-fall resurgence. Recent measurements of sea level height from the Ocean Surface Topography Mission (OSTM)/Jason-2 oceanography satellite showed that a strong wave of warm water, known as a Kelvin wave, had spread from the western to the central and eastern Pacific. This warm wave appears as the large area of higher-than-normal sea surface heights in the area between 170 degrees east and 100 degrees west longitude.

This image was created with data collected OSTM/Jason 2 during a 10-day period centered on November 1, 2009. Red and white areas in the central and eastern equatorial Pacific were 100 to 180 millimeters (4 to 7 inches) above normal. In the western equatorial Pacific, blue and purple areas show where sea levels were between 80 and 150 millimeters (3 and 6 inches) below normal.

Sea surface height is an indication of temperature because water expands slightly as it warms and contracts as it cools. The elevated sea levels in the central and eastern Pacific are equivalent to sea surface temperatures more than one to two degrees Celsius above normal (two to four degrees Fahrenheit).

The Kelvin wave was triggered by a large-scale, sustained weakening of trade winds in the western and central equatorial Pacific during October. The change in winds disturbs not only the surface currents but also the deeper ocean circulation. The disturbances reverberate along the thermocline—the boundary between warm, surface water and cold, deep water—as large, slow-moving waves. Similar, weaker events that began in June 2009 initially triggered and have sustained the present El Niño.

Although El Niño means drought in some parts of the world, in other places it can bring drought relief. “In the American West, where we are struggling under serious drought conditions, this late-fall charge by El Niño is a pleasant surprise, upping the odds for much needed rain and an above-normal winter snowpack,” said oceanographer Bill Patzert of NASA’s Jet Propulsion Laboratory in California.