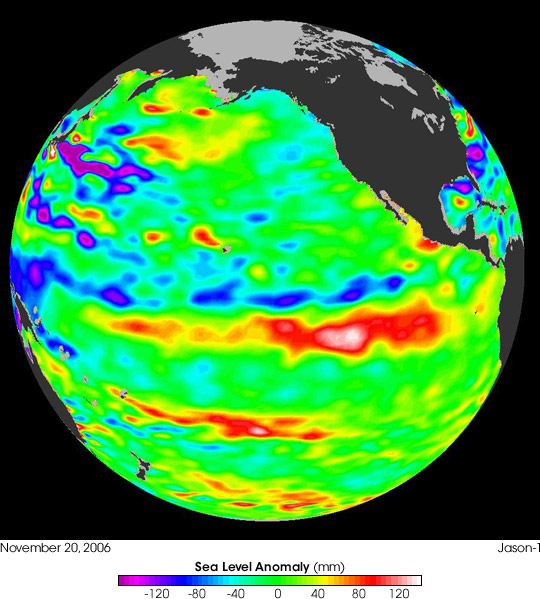 In the Pacific Ocean around the equator, persistent easterly winds, the trade winds, blow across the ocean. The strong, steady winds push surface waters westward, and in fact, the sea surface height in the western Pacific near Indonesia is about 45 centimeters higher on average than the height in the eastern Pacific off the coast of Ecuador. The Indonesian waters are also warmer because as the winds move sun-warmed surface waters away from South America, colder, deeper ocean water wells up to the surface. Occasionally the trade winds weaken, and the water piled up in the western Pacific slides gently back across the Pacific. This pulse of returning warm water is called a Kelvin wave.

In mid-November 2006, a Kelvin wave was gliding its way across the Pacific and was captured in this image from the NASA/French Jason-1 satellite, which measures sea surface height using a laser altimeter. Because warm water takes up a little more space than cooler water, higher-than-normal sea surface height indicates warmer-than-normal sea surface temperatures. Within a 10-day period centered on November 20, 2006, Jason-1 observed elevated sea surface heights (red) associated with the passage of a Kelvin wave in the Pacific Ocean. Heights in the eastern equatorial Pacific were about 100 millimeters (4 inches) above normal. These regions contrast with the western equatorial Pacific, where sea levels were between 50 and 130 millimeters (2 and 5 inches) below normal (blue areas). Along the equator, the red sea surface heights equate to sea surface temperature departures greater than one to two degrees Celsius (two to four degrees Fahrenheit).

Persistent breakdowns of the trade winds result in a conveyor belt of Kelvin waves that deposit warm waters in the eastern Pacific; the resulting build up of warm water in the usually cool eastern Pacific is the hallmark of El Niño. A series of these types of events that began in August 2006 have contributed to the present El Niño condition. El Niño events influence weather patterns around the globe. The American West, which has been struggling with drought, often receives more rain during Niño events. But in southeastern Australia, Niño may increase the possibility for a severe summer fire season.

This Jason-1 image shows sea surface height anomalies with the seasonal cycle (the effects of summer, fall, winter, and spring) and trend removed. The differences between what the image shows and what is normal for different times and regions are called anomalies. When oceanographers and climatologists view these anomalies, they can identify unusual patterns and can tell how heat storage in the ocean could influence future planetary climate events.