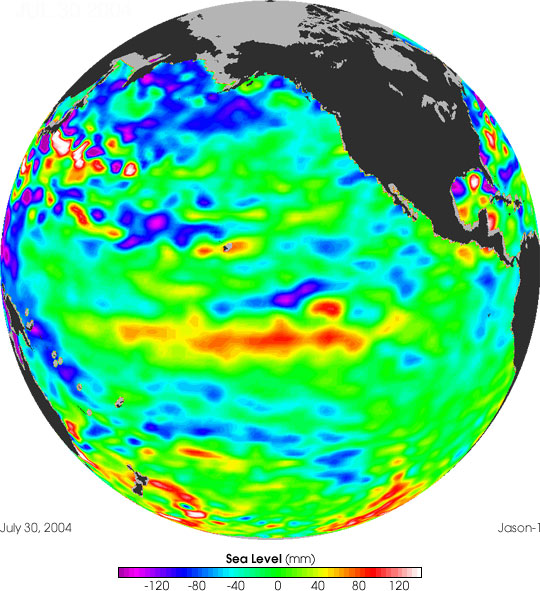 Recent sea-level height data from the U.S./France Jason altimetric satellite during a 10-day cycle ending July 27, 2004, show that weaker than normal trade winds in the western and central equatorial Pacific during June have triggered an eastward moving, warm Kelvin wave. In the central equatorial Pacific, this “warm wave” appears as the large area of higher-than-normal sea surface heights (warmer-than-normal sea surface temperatures) between 180 degrees W and 130 degrees W. These types of events, should they continue and persist into the fall, can herald the beginnings of an El Niño episode.

“Although an El Niño would be welcome in the American west which definitely needs the rainfall, it’s way too early to even begin talking about a possible El Niño,” said JPL oceanographer Dr. Bill Patzert. “Scientists will continue to monitor the Pacific closely for further signs of possible El Niño formation and intensity,” said Dr. Lee-Lueng Fu, JPL Jason Project Scientist.

The image shows a red area in the central equatorial Pacific that is about 10 centimeters (4 inches) above normal. These regions contrast with the eastern equatorial Pacific, where lower-than-normal sea levels (blue areas) continue that are between 5 and 13 centimeters (2 and 5 inches) below normal. Along the equator, the red sea surface heights equate to sea surface temperature departures greater than one degree Celsius (two degrees Fahrenheit).

These images show sea surface height anomalies with the seasonal cycle (the effects of summer, fall, winter, and spring) removed. The differences between what we see and what is normal for different times and regions are called anomalies, or residuals. When oceanographers and climatologists view these “anomalies” they can identify unusual patterns and can tell us how heat is being stored in the ocean to influence future planetary climate events. Each image is a 10-day average of data, ending on the date indicated. The U.S. portion of the Jason mission is managed by JPL for NASA’s Earth Science Enterprise, Washington, D.C. Research on Earth’s oceans using Jason and other space-based capabilities is conducted by NASA’s Earth Science Enterprise to better understand and protect our home planet.