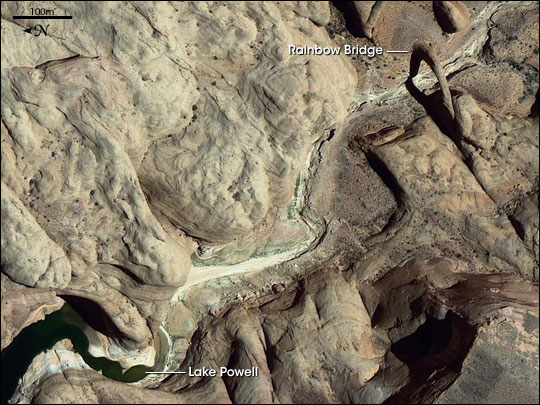 It’s not hard to see why Native American cultures consider Rainbow Bridge sacred. The huge stone bridge that straddles this feeder canyon to the Colorado River in southern Utah is a dramatic and mysterious sight. More than 88 meters tall (290 feet), and spanning nearly 84 meters (275 feet) across Bridge Creek, the bridge and surrounding canyonlands are part of a National Monument established by President William Howard Taft in 1910.

This spectacularly detailed Ikonos satellite image from July 7, 2003, could almost be mistaken for an aerial photo. Rainbow Bridge is at the upper right of the scene, casting its shadow on the rugged canyon below. Downstream at bottom left, the blue-black waters of the northern portion of Lake Powell, created by the Glen Canyon Dam, are as dark as a shadow. Above the lake, the creek is little more than a series of greenish-brown puddles along a sandy wash. The West is in the midst of one of the region’s recurring multi-year droughts, and Lake Powell is at its lowest level since it finished filling in 1980. As the lake shrinks, many of the previously flooded side canyons are re-emerging, revealing archaeological and geological features that haven't been seen for decades. When the reservoir is full, Lake Powell extends underneath Rainbow Bridge.

Drought is a recurring theme for the Colorado Plateau region, a pattern that repeats itself on numerous time scales—from one season to the next, from one decade to the next, and from one geologic age to the next. It was the geologic-scale swinging of climate between wet and dry episodes that created rock that would respond to the forces of erosion so differently that some would remain standing while the river washed the rest away.

Rainbow Bridge is made from sandstone formed during end of the Triassic and the Jurassic. Extreme fluctuations in climate during the Triassic and Jurassic periods—the region was alternately a sea and desert on par with the Sahara--produced layers of sandstone with different levels of hardness. Water had the last word in the Jurassic, and the great sea returned to cover these layers of sandstone and compress them so tightly that they would persist until the present day.

As Bridge Creek flowed toward the growing Colorado River during the last ice age, it carved first through softer rocks and veered away from the harder Triassic and Jurassic sandstones, eventually creating a wide hairpin bend that flowed around a solid “fin” of sandstone that would become Rainbow Bridge. The previous course of the creek is visible above the bridge in this image. Water flows back on itself at bends and wide spots, creating swirling eddies along the banks. As the creek flowed around Rainbow Bridge fin, eddies formed on both the upstream and downstream sides. The sediment in the creek eventually scoured the softer layers of sandstone away, leaving the harder layers behind.

For more information on the cultural or geological history of this canyon, visit the Rainbow Bridge Website of the National Park Service.