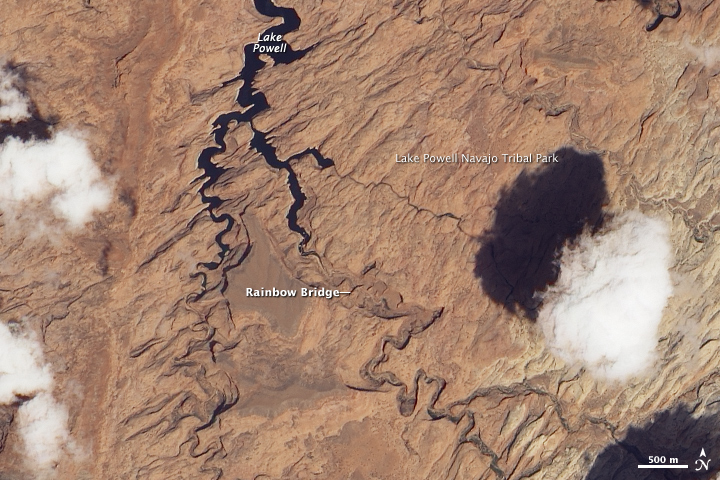 At the far southern end of Lake Powell, on the arid, earth-toned Colorado Plateau, a massive sandstone bridge straddles a river valley. May 30, 2010, marks the centennial of this dramatic rock formation—Rainbow Bridge—as a United States national monument. President Taft set the area aside in 1910 to preserve the rare geologic feature.

On May 23, 2010, the Advanced Land Imager (ALI) on NASA’s Earth Observing-1 (EO-1) satellite captured this natural-color image of the Rainbow Bridge area. Red, brown, and beige rocks predominate in this scene. In the past, the water level in Lake Powell has been high enough to submerge the canyon, but if any water trickled through the streambed below the bridge at the time of this image, the stream was too narrow for the satellite sensor to see. Clouds and canyon walls cast dark shadows toward the northwest. The bridge also casts its own slim shadow.

Though it might look manmade, the bridge owes nothing to human invention: its sculptor was water. The bridge is made of ancient sandstones—the base laid down more than 200 million years ago by inland seas, and the bridge itself left over from massive dunes that once marched across a shifting-sand desert. In the millions of years that followed, newer rock layers were deposited on top of these sediments, hardening them into tough sandstones.

About 5.5 million years ago, tectonic forces began uplifting the region. The uplift led to erosion of overlying rock layers, and also steepened the gradient of local streams, increasing their ability to eat through the remaining sandstones. A tall, thin structure of sandstone projected skyward on this uplifted plateau, and for many years, a local stream curved around it. Because the structure’s sandstone wasn’t strong enough to resist erosion indefinitely, the water eventually wore through the rock, forming a natural bridge.

Although this natural bridge will outlast many human-built structures, it won’t persist forever. The same geologic forces that made the bridge will eventually destroy it. Water will likely continue to wear away at the bridge’s base until it collapses.