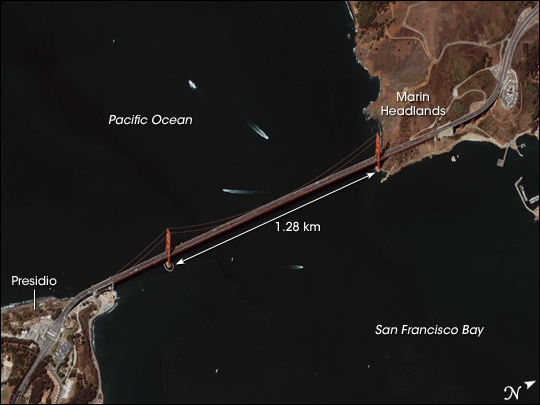 In the early 19th century, the village of Yerba Buena overlooked a natural harbor along the Pacific Ocean. In 1848, a local carpenter found gold in northern California, ushering in the California Gold Rush. The village’s population quickly grew to 35,000. Several decades and a devastating earthquake later, the city, now called San Francisco, was looking for ways to ease the flow traffic across the bay. By the early 1920s, a bridge seemed like the natural solution—to some. Many San Franciscans resisted the idea of bridging their great harbor and obscuring their view of the sunset with a human-built structure. After years of debate over the need for a bridge, and concern over how such a big structure could safely be built, the construction project finally began in 1933. On May 27, 1937, the Golden Gate Bridge opened to pedestrian traffic, with 18,000 people waiting to walk across. Vehicles followed the next day.

Space Imaging’s IKONOS satellite acquired this image of the Golden Gate Bridge on August 28, 2004. Spanning the narrow mouth of the San Francisco Bay, the bridge connects the Presidio of San Francisco in the south to the Golden Gate National Recreation Area, near the town of Sausalito, in the north. The bridge’s characteristic bright orange finish stands out against the dark water below, as the occasional boat leaves a white wave trail in the San Francisco Bay. Although it enables thousands of commuters to cross the bay, the bridge is not the only means of reaching the city; commuters also rely in ferryboats.

When it was completed, the Golden Gate Bridge was the world’s largest suspension bridge, hanging from two high towers and arcing downward between them. The bridge’s designers used a modified version of the suspension bridge plan, enabling it to support the heavy load of vehicle traffic. The bridge was still vulnerable to high winds, however, and had to be closed briefly in a 1951 windstorm that rippled the roadway.

The Golden Gate Bridge is just one of the newer features of an area that has long seen human habitation. This natural harbor was home to Native Americans more than 1,200 years ago. With the arrival of Spanish soldiers in 1776, the area began to change hands, alternately serving as a military post for Spain, Mexico, and the United States.

The Golden Gate of San Francisco Bay is one of the most recognizable straits in the world due to the Golden Gate Bridge that spans it. This high-resolution astronaut photograph is a nearly cloud-free view of the northern part of the San Francisco metropolitan area.