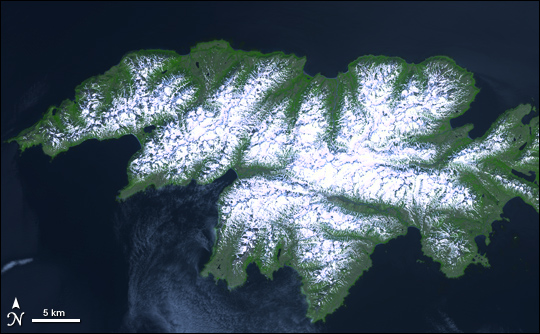 Attu Island is so far west, it’s actually in the Eastern Hemisphere. It is the westernmost of Alaska’s Aleutian Islands, even farther west than the Hawaiian Islands. At roughly 32 by 56 kilometers (20 by 35 miles), the island lies roughly 1,700 kilometers (1,100 miles) from mainland Alaska. Its location made the island a highly contested spot in World War II. In early June 1942, Japanese invaded Attu Island, and many Americans feared it would become a staging ground for attacks on mainland North America. About a year later, Americans recaptured the island and began using it as a staging ground for attacks on Japan.

The Advanced Spaceborne Thermal Emission and Reflection Radiometer (ASTER) on NASA’s Terra satellite took this picture of Attu on July 4, 2000. Even in the Northern Hemisphere summer, the island is largely covered with snow, which appears brilliant white compared to the island’s otherwise green landscape. Typical weather on Attu is cloudy, foggy, and rainy, and sunny days are rare.

As part of the Aleutian Islands, Attu is also part of the “Ring of Fire”—a region of frequent seismic and volcanic activity encircling the Pacific Ocean. The island does not, however, support any active volcanoes. Although Aleutians lived on the island prior to the Japanese invasion, the only people living permanently on the island today are U.S. Coast Guard personnel.