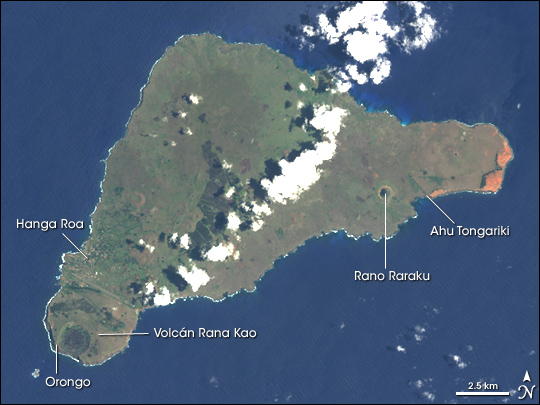 On Easter Sunday in 1722, a Dutch explorer sailing in the vast and nearly landless waters of the South Pacific Ocean came upon a small island, alone in more than 8.5 million square miles of sea. In honor of the religious holiday, the explorer, Jacob Roggevee, called the lonely spot Easter Island. Today, the native people call the island Rapa Nui, but the oldest known name appears to be Te Pito o Te Henua, or “The Center (or Navel) of the World.”

When the Dutch sailors arrived, the isolated island had already been inhabited for more than one thousand years, most likely settled by Polynesian sailors in canoes between 400 and 700 A.D. The most amazing cultural artifacts on display were giant stone statues, called moai, resting on ahu, a raised platform of expertly fitted stones. (Ahu also describes a sacred ceremonial site where several moai stand.)

Most of the hundreds of moai on the island were carved out of volcanic rock in the crater of Rano Raraku, located in the southeastern part of the island. In addition to the hundreds of moai located at ahu around the island, Rano Raraku is littered with moai, some only half-carved, others that appear to have broken in the attempt to remove them from the quarry, and still others that seem to simply have been abandoned.

East of Rano Raraku is Ahu Tongariki, where in 1960 a tidal wave caused by an earthquake in Chile struck the southern coastline and swept 15 moai inland for several hundred feet. In 1992, the site was restored by a Chilean archeologist. On the western end of the island is the only town, Hanga Roa, where most of Rapa Nui’s 2,000 residents live. South of the town is the island’s largest volcanic crater, Rana Kao. Along the crater rim looking southward over the coast, lie the ruins or Orongo, a ceremonial site containing elaborate stone carvings and other artwork.

Speculation about how the island’s inhabitants built and moved the massive moai to ahu all along the coastline and at various sites in the island’s interior has fueled scientific imagination and controversy that goes on today. Several experiments have been carried out using materials that would have been available to the inhabitants, and most scientists agree that any method they might have used would have required a large amount of wood and wood fiber: to construct sleds or other sliding platforms, to make ropes, and to create levers to help position the statues.

The demand for wood eventually stripped the island of nearly all its forests, and when the lush palm forests disappeared, the topsoil began to erode. Crops failed and archeological and anthropological evidence suggests violent civil wars and perhaps even cannibalism preceded the collapse of Rapa Nui’s first civilization. The loss of wood guaranteed the inhabitant’s isolation for hundreds of years. The islanders were unable to build canoes. After hundreds of years of isolation, the arrival of the Dutch sailors was probably as surprising to the native islanders as the discovery of a populated island in such a remote location was to the Europeans.

Landsat 7’s Enhanced Thematic Mapper Plus (ETM+) instrument collected this image of the island on January 3, 2001.