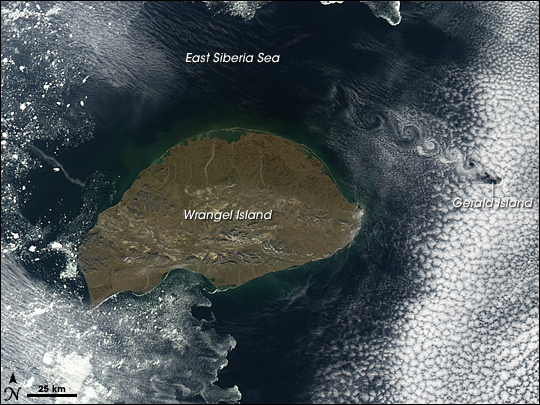 Part of the Russian Federation, Wrangel Island rests above the Arctic Circle between the Chukchi and East Siberian Seas, northeast of Siberia. Skies were clear over the island in August 18, 2008, giving the Moderate Resolution Imaging Spectroradiometer (MODIS) on NASA’s Aqua satellite a chance to capture this image.

Although it looks like bare rock, this mountainous island supports diminutive Arctic tundra plants. To the east of Wrangel, along the edge of a bank of clouds, lies a much smaller landmass: Gerald, or Herald, Island. The paisley-shaped clouds flowing away from Gerald Island are Von Karman Vortices, swirling eddies caused by the island’s obstruction of air flow.

The rocks that make up Wrangel Island were deposited between the late Precambrian (before multicellular organisms began leaving fossils in the rock record) and the early Mesozoic Era (the age of the dinosaurs). Erosion from glaciers and weather have reworked these rocks into sands and gravels that cover much of the surface. Barrier islands along Wrangel’s northern rim results from sediments being reworked by wave action. This suggests that open water around Wrangel Island has been common enough to create these surf-generated landforms.

Between 1989 and 1991, researchers collected tusks, teeth, and bones from wooly mammoths from Wrangel Island. Radiocarbon dating suggests that mammoths lived on Wrangel Island as recently as 3,730 years ago, as much as six millennia after the same species went extinct in continental Siberia. More recently, the island has been declared a World Heritage site, due to its importance in providing polar bear, Pacific walrus, and migratory bird habitat.

You can download a 250-meter-resolution KMZ file of the island and surrounding area suitable for use with Google Earth.