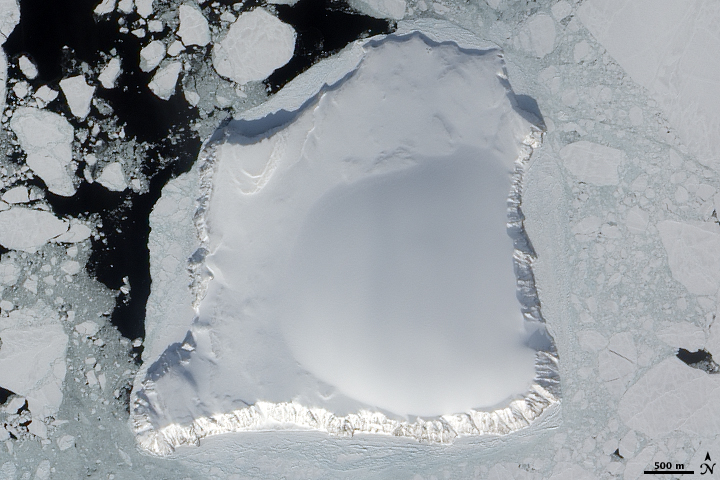 Henrietta Island is a small, round, glacier-capped island in the East Siberian Sea, just 6 kilometers (3.7 miles) across. In 1881, the crew of the USS Jeannette found Henrietta somewhat by accident, after getting caught in a pack of sea ice and drifting north of the intended target of Wrangel Island. Henrietta is the northernmost island in the DeLong Archipelago, named after the expedition’s Lieutenant Commander George DeLong.

The Advanced Land Imager (ALI) on NASA’s Earth Observing-1 satellite captured this image of Henrietta Island on April 30, 2009. In this natural-color image, the island casts shadows to the north, thanks to the Sun’s low angle and the island’s own steep, rugged coastline. Inland, an icy dome covers most of the island, its southern surface slightly illuminated. DeLong sketched the island’s gently sloping surface on his expedition.

Henrietta Island’s relatively smooth surface belies a complicated geologic history. According to a paper published in 2007, the island includes a complex assortment of volcanic rocks, some dating back to the Ordovician Period (roughly 500 to 450 million years ago). Subsequent heat and pressure metamorphosed those rocks, and a much younger layer of sedimentary rocks—deposited by wind and water—also occurs on Henrietta Island.