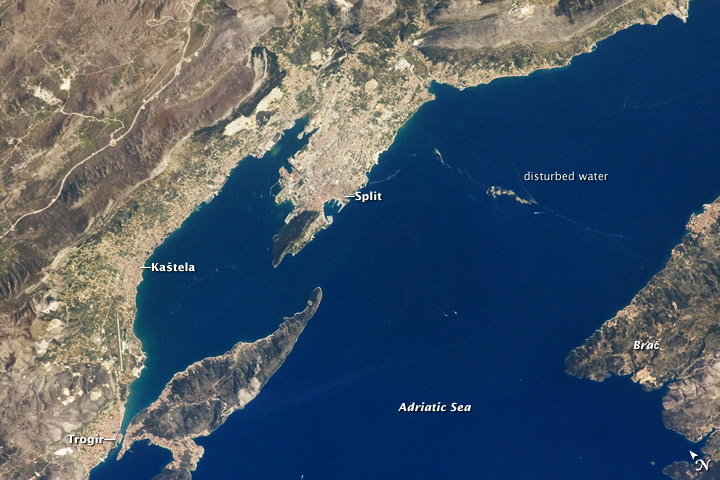 One the world’s most rugged coastlines is located in Croatia along the Adriatic Sea. This astronaut photograph features the Dalmatian coastline of Croatia around the city of Split. Much of the region’s topography is characterized by northwest-southeast-oriented islands and embayments of the Adriatic Sea. These distinctive coastal land forms result from faulting (caused by tectonic activity in the region) and sea level rise since the end of the last ice age.

Split has a long history of human settlement. The Roman Emperor Diocletian retired to Spalatum (present-day Split) in 305, and his palace constitutes the core of the city today. The city is a popular resort destination for its historic sites, Mediterranean climate, and ready access to Adriatic Sea islands (such as Brač, to the south). Other large cities in the region include Kaštela and Trogir; together with Split, these form an almost continuous urban corridor along the coast (visible as pink regions in the image).

A thin zone of disturbed water (tan patches) marking a water boundary appears in the Adriatic Sea between Split and the island of Brač. It may be a plankton bloom or a line of convergence between water masses, which creates rougher water. A unique combination of features—including dramatic topography that channels local winds, the complicated coastline, input of fresh water from rivers, and ample nutrients and natural surface oils—produce interesting mesoscale surface dynamics throughout the Adriatic Sea. Over the years, astronauts have taken images of the Split region using sunglint (the mirror-like reflection of the Sun off water) and changes in water color to highlight features like eddies, water boundaries and mixing zones between fresh waters flowing into the saltier (denser) waters of the Adriatic, and wind-driven surface currents.

Split is an important transit center connecting islands in the Adriatic Sea to the Italian peninsula, and it is an important regional manufacturing center of goods such as solar cells, plastics, and paper products. The city was heavily industrialized during the post-World War II period as a member state of Yugoslavia. By the 1980s, the marine environment bordered by Split, Kaštela, and Trogir (known as Kaštela Bay) had become one of the most polluted areas of the Adriatic, both from sewage and industrial pollution. Concerted efforts by the Croatian government and international partners to improve waste handling and treatment infrastructure over the past 10 years seem to have been successful in improving water quality.

Astronaut photograph ISS019-E-5501 was acquired on April 9, 2009, with a Nikon D2Xs digital camera fitted with a 180 mm lens, and is provided by the ISS Crew Earth Observations experiment and the Image Science & Analysis Laboratory, Johnson Space Center. The image was taken by the Expedition 19 crew. The image in this article has been cropped and enhanced to improve contrast. Lens artifacts have been removed. The International Space Station Program supports the laboratory to help astronauts take pictures of Earth that will be of the greatest value to scientists and the public, and to make those images freely available on the Internet. Additional images taken by astronauts and cosmonauts can be viewed at the NASA/JSC Gateway to Astronaut Photography of Earth. Caption by William L. Stefanov, NASA-JSC.