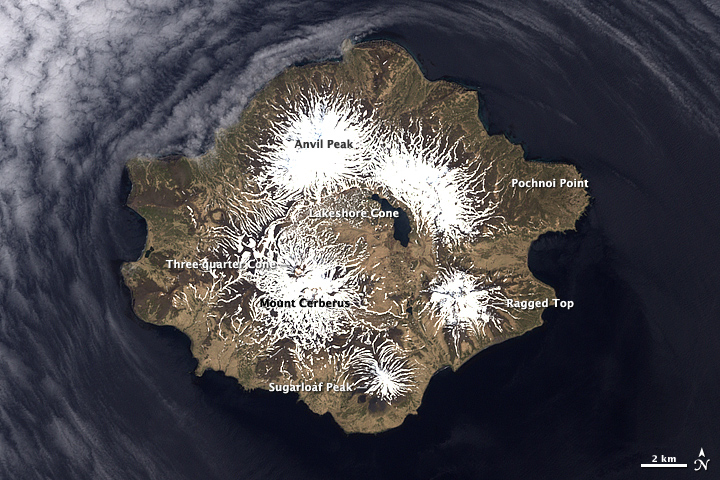 It is the “Island of the Seven Mountains, ” or more precisely in Russian: “having seven hills.” This uninhabited volcanic island is also an important nesting area for maritime birds of the North Pacific.

Situated on the far end of the Aleutians, Semisopochnoi Island is simultaneously the most easterly and westerly point of the United States of America. Roughly 1,275 miles (2,050 kilometers) west-southwest of Anchorage, Alaska, Semisopochnoi lies near the 180-degree line of longitude, in the Rat Islands group in the western Aleutian Islands.

This pseudo-true color image was acquired on June 22, 2000, by the Enhanced Thematic Mapper Plus (ETM+) on Landsat 7. Colors are what you would expect: snow is white, bare ground is tan, water is blue, clouds are grey, and vegetation is green.

The seven hills of the island are volcanic peaks, each with a summit crater, including Cerberus, Sugarloaf Peak, Lakeshore Cone, Anvil Peak, Pochnoi, Ragged Top, and Three-quarter Cone. The high point of the island is Anvil Peak at 1,221 meters, a double-peaked cone. The three-peaked Mount Cerberus volcano (774 meters high) grew up within the caldera as the volcanic hot spot rose up from the sea floor. Most documented eruptions have come from Cerberus, with the most recent major eruption recorded in 1873. The most recent eruption on the island, though minor, came from Sugarloaf in 1987.

Semisopochnoi has no native land mammals, so it is a natural nesting area for sea birds. But bird populations were decimated after Arctic foxes were introduced to the island for fur farming in the 19th century. In 1997, the last fox was removed from the island to allow the birds a safe refuge again. Part of the Alaska Maritime National Wildlife Refuge (AMNWR), the island now supports more than a million seabirds, particularly auklets, according to the National Audubon Society. 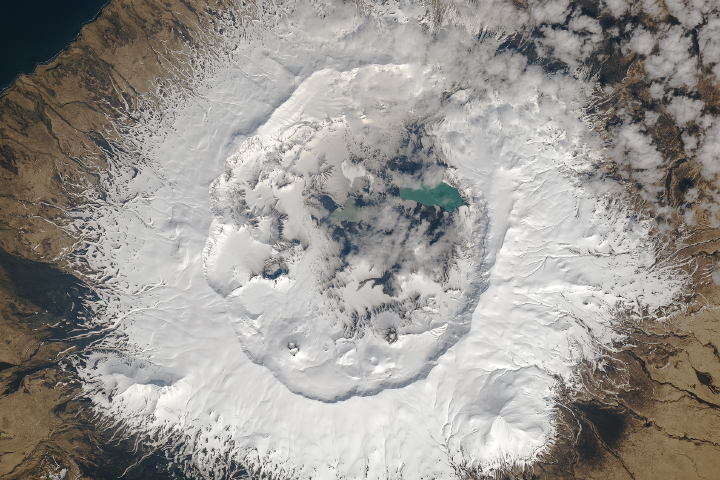