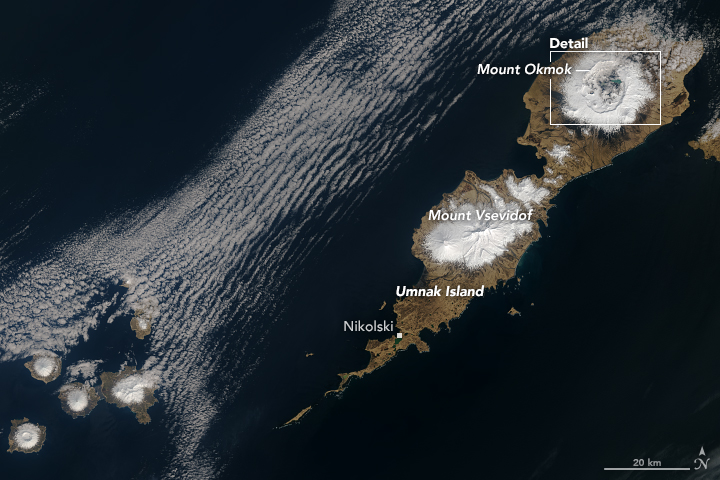 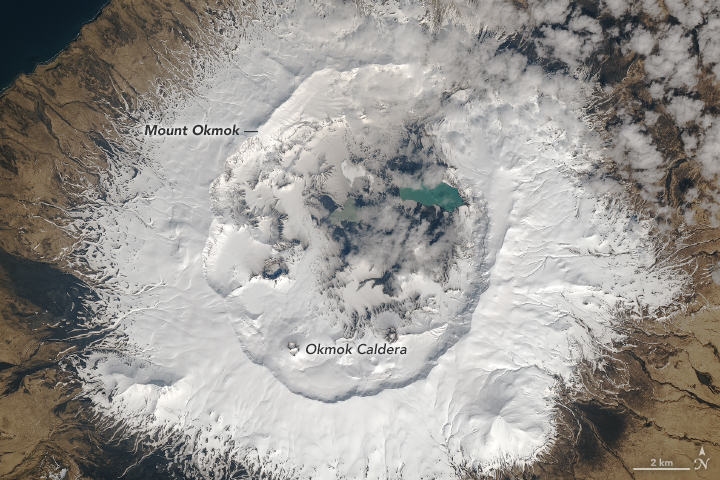 Some parts of the Earth are camera shy. Cloud cover seems to be ever-present around the equator and at high latitudes—where warm water and air from middle latitudes meet cooler air and water masses from the Arctic, creating near-constant fog, mist, and marine clouds. Umnak Island is one of those spots that hides from satellite lenses.

On May 3, 2014, the Operational Land Imager (OLI) on Landsat 8 acquired this natural-color image of Umnak Island and its volcanic neighbors in the Aleutian Island chain. Part of the Fox Islands, Umnak is the third largest in the Aleutian chain and lies just southwest of Unalaska.

Adventure writer Erin McKittrick described Umnak as “a place of tumultuous interruptions.” A major volcanic eruption about 8,000 years ago buried ancient settlements of Unangan Aleuts, a people who may have descended from those who crossed the Bering Land Bridge. Other eruptions and floods (caused by volcanic heating of snow and ice) have paved over the island many times. Russian traders and colonists wiped out or chased off much of the population in the 1700s. Another generation fled or were evacuated by U.S. troops during a buildup of air and naval bases during World War II. The most recent volcanic eruptions in 2008 further shrank the population.

Umnak is now mostly unpopulated, with roughly 40 people living in the village of Nikolski near the southwest tip of the island. There are thousands of cows, however, a remnant of ranches that have been long abandoned. Located within the Alaska Maritime National Wildlife Refuge, the island is rich with natural wonders, with abundant wildflowers, berries, mosses, and grasses in the warmer seasons; black sand beaches for a dip in the Bering Sea; and plenty of wild reindeer. Being a volcanic island, Umnak has numerous mud pots, hot springs, and the only geysers in Alaska.

The landscape is dominated by volcanoes. On the northern half of the island, Okmok—site of the 2008 eruption—rises 1073 meters (3,520 feet) above sea level as a broad shield volcano with a caldera nestled near the top. A crater lake sits amidst the volcanic ash and debris in the caldera. Mount Vsevidof, a symmetrical stratovolcano, rises 2149 meters (7,050 feet) and dominates the skyline of the southern portion of Umnak Island.

The volcanic Islands of the Four Mountains are also visible in the lower left of the wide image.