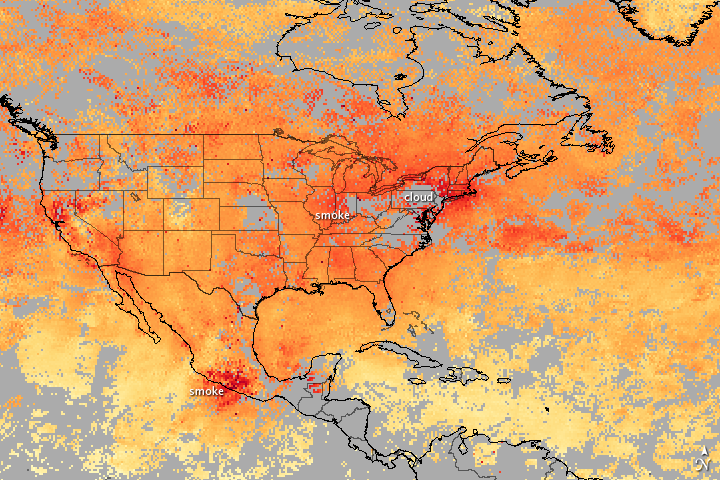 Spring is a time for planting, and one very common tool for preparing the ground is fire. Smoke from agricultural burning can drift over wide areas, as it did in mid-May 2010. As this image shows, the smoke raised carbon monoxide concentrations slightly in parts of Mexico, southern Canada, and the U.S. Great Plains and New England.

The most obvious burning signal is in Mexico, where fires burned along both the Pacific coast and the Gulf of Mexico. The plume of carbon monoxide over the Pacific Ocean is easy to see against the lighter background concentration of the gas over the ocean. Red and darker tones of orange over the Gulf indicate that smoke is also moving north from the Yucatan region. The smoke spread north into Texas and surrounding states, reported the Smog Blog. In this image, carbon monoxide concentrations are higher in Texas and the southern Plains than the overall background over most of the United States.

The other two concentrated areas of carbon monoxide are in the northern Great Plains and the northeastern United States. Clusters of fires are emitting smoke in the northern Plains states, particularly Minnesota and Wisconsin. Smoke from fires in southern Canada and the Plains states moved east over New England and the Atlantic Ocean. The smoke plume is reflected in elevated carbon monoxide concentrations in these regions.

NASA image by Jesse Allen, made with data provided by the National Center for Atmospheric Research (NCAR) and the University of Toronto MOPITT Teams. Caption by Holli Riebeek.

The highest concentrations of carbon monoxide, a component of smoke, are centered over large fire complexes in Russia in this image that tracks smoke transport across the Arctic.