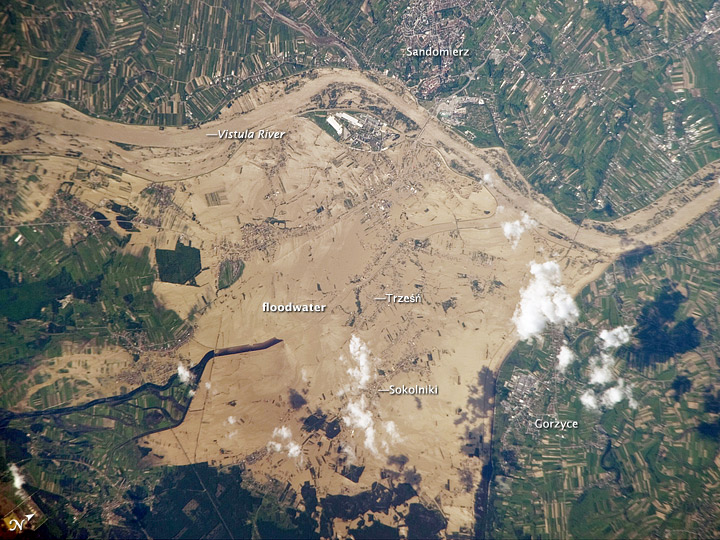 This image, taken by astronauts onboard the International Space Station, shows widespread flooding along the Vistula River in southeastern Poland. A major river in Poland, the Vistula originates on the western slopes of the mountain Barania Góra in the Carpathian Mountains in southern Poland. The river winds its way northward for 1,047 kilometers (651 miles), through major cities such as Krakow and Warsaw, to Gdansk Bay on the Baltic Sea. Several towns have been completely or partially inundated including Gorzyce, Sokolniki, and Trześń in addition to large numbers of agricultural fields (normally green as visible at image top and bottom right). While the flooding illustrated here is extensive, it represents but a small “snapshot” of conditions that have developed in Eastern Europe over the past one to two weeks.

Spring flooding of rivers is not an uncommon occurrence in Poland but this event has been described as the most serious flood in several decades. Severe floods were recorded in 1570, 1584, 1719, 1891, and 1997, with the first records of local embankments for flood control dating from the thirteenth century. By 1985, 370 rivers in Poland (including the Vistula) had been completely or partly embanked along a total length of 9,028 kilometers (5,610 miles) for some degree of flood mitigation. In the spring of 2010, heavy rains caused high waters in the Vistula River, first in southern Poland. Hundreds of thousands of people were evacuated as the river level rose and broke through waterlogged dikes and embankments. The flood surge then moved northward through Warsaw, continuing towards the Baltic Sea.

Astronaut photograph ISS023-E-50542 was acquired on May 22, 2010, with a Nikon D3S digital camera using an 800 mm lens, and is provided by the ISS Crew Earth Observations experiment and Image Science & Analysis Laboratory, Johnson Space Center. The image was taken by the Expedition 23 crew. The image in this article has been cropped and enhanced to improve contrast. Lens artifacts have been removed. The International Space Station Program supports the laboratory as part of the ISS National Lab to help astronauts take pictures of Earth that will be of the greatest value to scientists and the public, and to make those images freely available on the Internet. Additional images taken by astronauts and cosmonauts can be viewed at the NASA/JSC Gateway to Astronaut Photography of Earth. Caption by Susan K. Runco, NASA-JSC.

Taken on May 22, 2010, this astronaut photograph shows flooding along the Vistula River near the towns of Gorzyce, Sokolniki, and Trześń.

Severe flooding raised Poland’s rivers to their highest levels in over a century in May 2010.