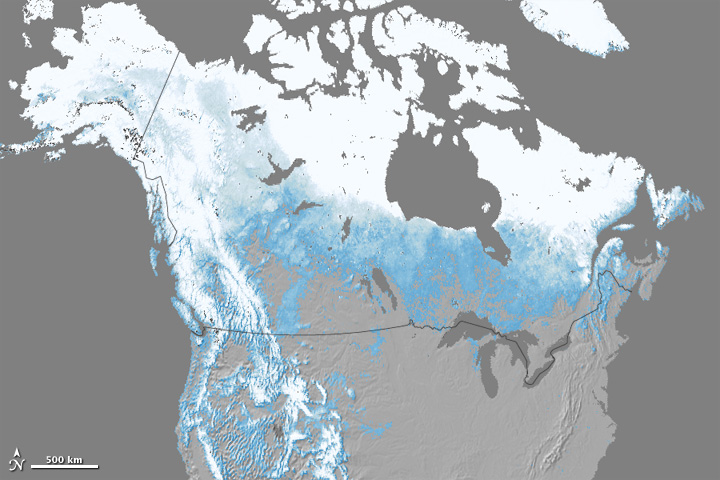 Winter 2009-2010 was much colder than normal for the United States, and it delivered a string of record-breaking snowstorms that began on the winter solstice.

The snow and cold didn’t linger far into the spring, however. By the end of April, North American snow cover had retreated to the lowest extent in the 1967â€“2010 record, according to the National Oceanic and Atmospheric Administration’s April 2010 State of the Climate Report. This map shows percent snow cover across North America in April 2010 based on observations from the Moderate Resolution Imaging Spectroradiometer (MODIS) on NASA’s Terra satellite. Percent snow cover ranges from just above zero (light blue) to 100 percent (white). Land areas with no detectable snow cover during the month are gray.

According to NOAA, “Across North America, snow cover for April 2010 was 2.2 million square kilometers below average—the lowest April snow cover extent since satellite records began in 1967 and the largest negative anomaly to occur in the 521 months that satellite measurements are available.” Unusual warmth descended on North America in April, leading to both low snowfall amounts and rapid melt of existing snow.

The Earth Observatory’s Global Maps section provides an animation of monthly, global snow cover from February 2000 to the present.