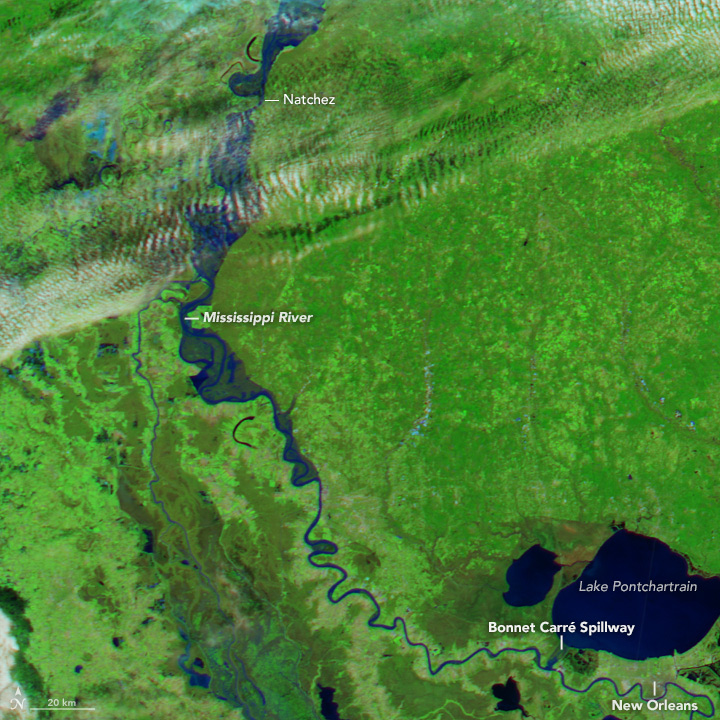 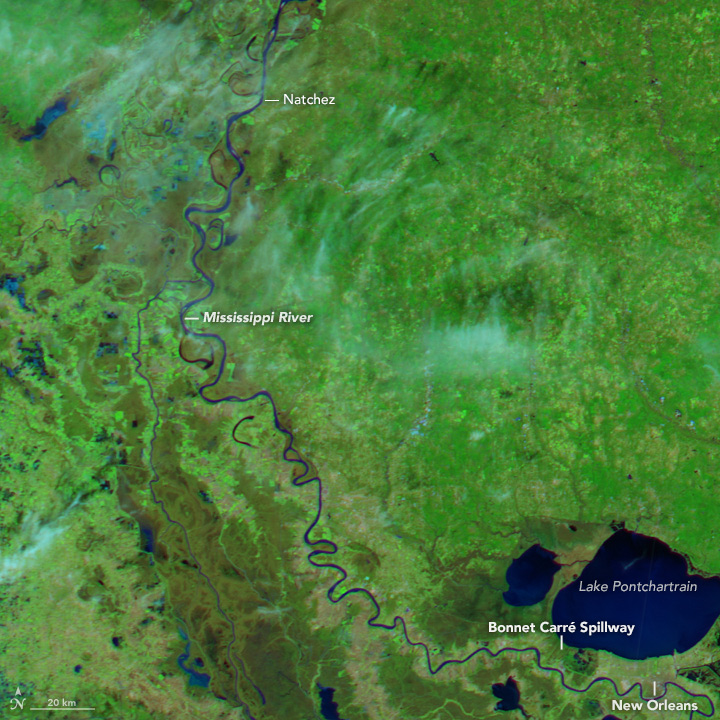 In early January 2016, communities along the southern reaches of the Mississippi River faced severe flooding from rains that fell weeks earlier and well to the north. Heavy December rains drenched parts of Missouri and Illinois, and the pulse of fresh water has finally reached Louisiana and Mississippi. On January 11, the U.S. Army Corps of Engineers opened the Bonnet Carré Spillway near New Orleans in preparation for the southward-moving pulse of flood water.

The images above, captured with the Moderate Resolution Imaging Spectroradiometer (MODIS) on NASA’s Aqua satellite, show the river as it runs through southern Mississippi and Louisiana. The top image was acquired on January 11, 2016; the bottom image shows the river at a normal level on January 24, 2015. Turn on the image comparison tool to see areas most affected by the flood.

Substantial flooding is unusual on the Mississippi River in winter. As noted by meteorologists at Weather Underground, this event was only the second time that a winter flood has made the top-40 list of flood crests at St. Louis in more than 200 years of records. (The other flood occurred in December 1982 during a major El Niño.)

According to John Kimball, a hydrology, ecology, and remote sensing expert at the University of Montana, the soil within the upper Missouri basin remained largely frozen. There was no rapid thaw or snowmelt that helped raise the river’s level. But elsewhere in the Mississippi Basin, precipitation that might typically fall as snow in December and January instead fell as rain.

“There has been much higher than normal rainfall over the southern and central portion of the Mississippi basin this winter, attributed to the strong El Niño,” Kimball said. “This led to soil saturation and more rapid and abundant runoff than in a normal winter.”

According to Kimball, data from NASA’s Soil Moisture Active Passive (SMAP) satellite confirmed that the rainfall led to widespread soil saturation over the central and southern Mississippi basin. The saturated ground set the stage for the area to feel the effects of the approaching flood water.

Over the course of a few weeks, the excess water (with contributions from the Ohio and Missouri rivers) made its way south. When the top image was acquired on January 11, river gauge observations and forecasts for the Mississippi River in Natchez, Mississippi, showed that the river stood at about 16.5 meters (54 feet)—about 2 meters above flood stage—and still rising.

Farther south in Louisiana, the Bonnet Carré Spillway was opened for the 11th time in its history to reduce pressure on levees in southeast Louisiana. The spillway was erected in 1931 to control flooding in the Lower Mississippi Valley by diverting water to Lake Pontchartrain. According to Richard Kesel of Louisiana State University, the Morganza Spillway to the north had not been opened—indicative that flooding was not anticipated to be a huge problem. 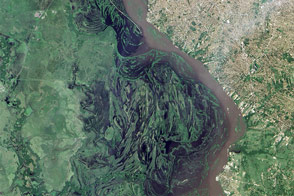 Flooding on the Mississippi River

The Mississippi and Missouri are Badly Swollen

At least 200 gauges along the waterways of the Central United States reported some level of flooding.