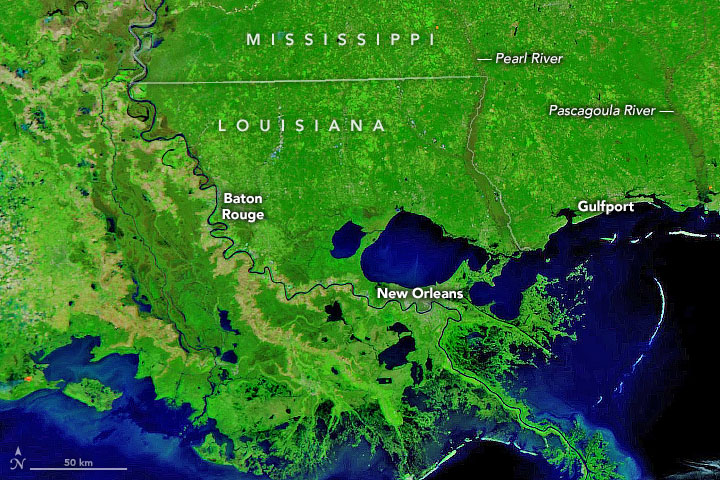 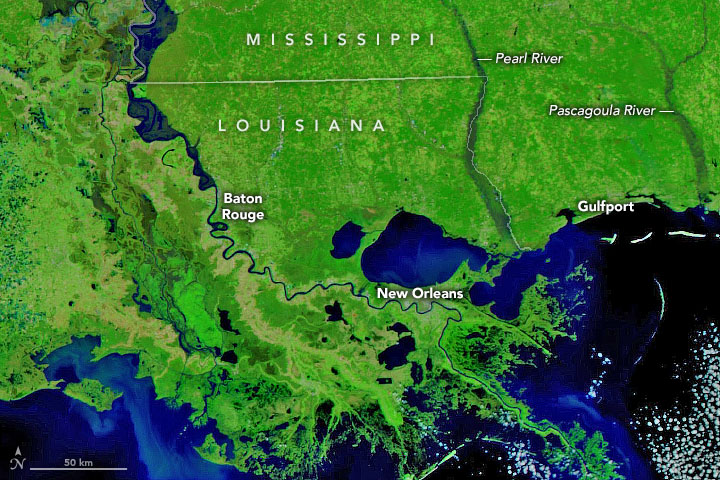 Persistent heavy rains soaked the Mississippi River watershed in the first two months of 2020. The result has been bulging rivers from Missouri to the Gulf of Mexico. Near-record flooding has brought two weeks of misery to the states of Mississippi and Tennessee, and high water is expected to arrive next week in New Orleans.

On February 27, 2020, the Visible Infrared Imaging Radiometer Suite (VIIRS) on the NOAA-NASA Suomi NPP satellite acquired an image showing high water along the lower Mississippi, Pearl, and Pascagoula rivers, among others. The second image shows more typical river conditions as they appeared on March 3, 2017. Both images use a combination of near-infrared and visible light to make it easier to see where rivers are out of their banks and spread across the floodplains. Since thick cloud cover obscured the area for the past 10 days, visible flooding had subsided somewhat before the satellite could get a clear view.

On February 17, the Pearl River near Jackson, Mississippi, crested at 36.8 feet (11.2 meters), the third highest level on record for the city and the highest since 1983. At least 1,000 homes in the area were inundated. The flood misery then spread downstream into Copiah, Marion, Hancock, and Lawrence counties. On February 29, the Pearl River stood at 17.86 feet (5.44 meters) near the town of the same name; the water level had dropped from major to moderate flooding the previous day.

Forecasters in Louisiana are expecting the Mississippi River to approach 17 feet (5.2 meters)—just below flood stage—in New Orleans by March 4. On February 29, the river had risen to 41.65 feet (12.69 meters) at Baton Rouge, a major flood stage for that area.

At midday on February 29, at least 17 river gauges along the Mississippi River south of Missouri were above flood stage (mostly minor to moderate), with five more in flood along the Pearl River.