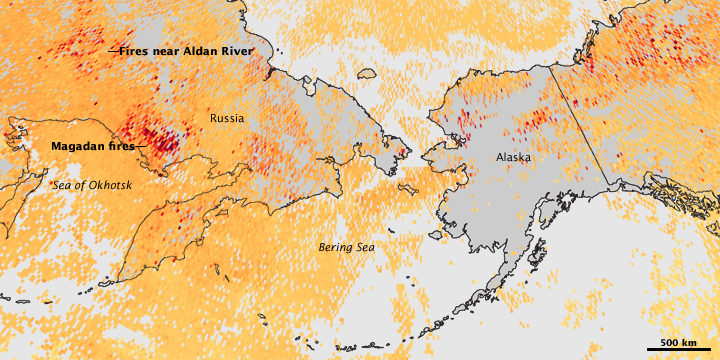 Intense fires burning in the boreal forests of northern Russia, Alaska, and Canada darkened Northern skies with smoke in July 2009. Large fires were burning in both Russia and Alaska in late July, and this image tracks the smoke from those fires by illustrating the concentration of carbon monoxide in the atmosphere.

The image was made with data collected by the Measurements of Pollution in the Troposphere (MOPITT) sensor on NASA’s Terra satellite between July 20 and July 26, 2009. Spots of red show where carbon monoxide concentrations were high, while orange areas point to moderate concentrations. Gray regions indicate places where no measurements were made, probably because of persistent clouds. The highest concentrations of carbon monoxide are centered over large fire complexes in Russia. Fires in Alaska were also pumping carbon monoxide into the atmosphere.

The highest concentrations of carbon monoxide, a component of smoke, are centered over large fire complexes in Russia in this image that tracks smoke transport across the Arctic.

Intense fires burning in the boreal forests of northern Russia, Alaska, and Canada darkened Northern skies with smoke in July and August 2009.