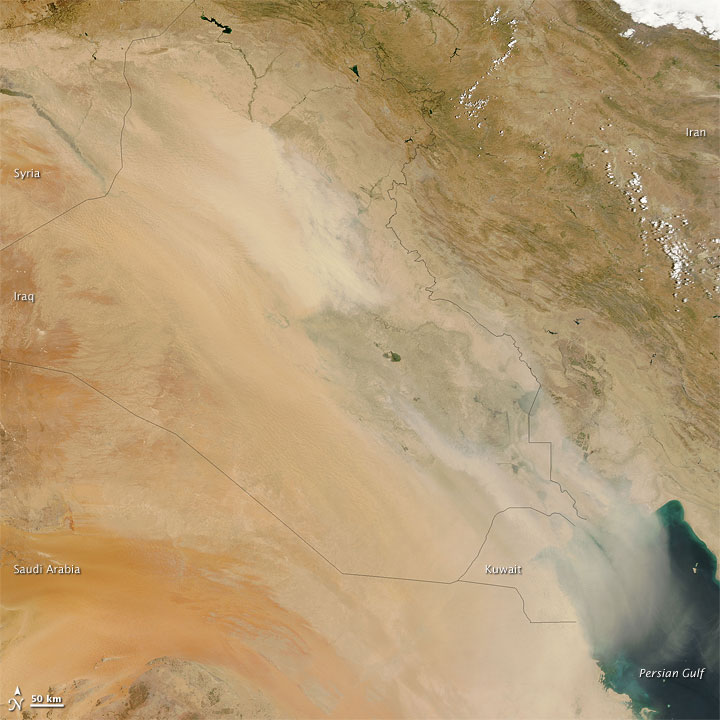 Dust storms are a common occurrence over the Middle East. The fine sediments of the Tigris and Euphrates floodplains have historically accounted for many if not most of the dust storms in the region, according to the University Corporation for Atmospheric Research. Since the turn of the twenty-first century, the frequency and duration of such storms have increased. Beginning in late June 2009, the worst dust storm in living memory struck Iraq and spread to neighboring countries. Another storm raged over Iraq again at the end of July.

The Moderate Resolution Imaging Spectroradiometer (MODIS) on NASA’s Aqua satellite captured this true-color image of Iraq on July 30, 2009, the second consecutive day of heavy dust over the country. Thick dust blows southeastward over the Tigris and Euphrates floodplain and the Persian Gulf. The dust is thick enough to completely hide the land surface and water bodies below.

Long known as Mesopotamia, or “the land between the rivers,” Iraq used to feed much of the Middle East, thanks to the fertile plains between the Tigris and Euphrates Rivers. In recent years, however, desertification due to regional drought and human-caused water shortages has claimed much of Iraq’s arable land, and the country that had traditionally exported food was expected to import almost 80 percent of its food in 2009, according to a report in the Los Angeles Times.

Regional drought dropped local precipitation levels 80 percent below normal in 2008, and 50 percent below normal during the first half of 2009. Electricity shortages worsened the situation both by shutting down machine-powered irrigation systems, and prompting locals to cut trees for fuel. Upstream of Iraq, Turkey and Syria withdrew greater amounts of water from the Tigris and Euphrates Rivers to meet their own needs, and Iran dammed small rivers draining into Iraq as well.

Wetlands in southern Iraq also suffered setbacks in the 1990s and early 2000s, alternately dammed for hydroelectric power, and deliberately drained by Saddam Hussein. Restoration efforts after the end of Hussein’s reign produced a temporary improvement, but experts reamin worried about the area’s long-term prospects, given the significant human demand for water.

Acquired July 30, 2009, this true-color image shows thick dust over Iraq and the northwestern end of the Persian Gulf.

A second severe dust storm in just over a month struck Iraq in late July 2009, blowing southeastward over the Tigris and Euphrates floodplains.