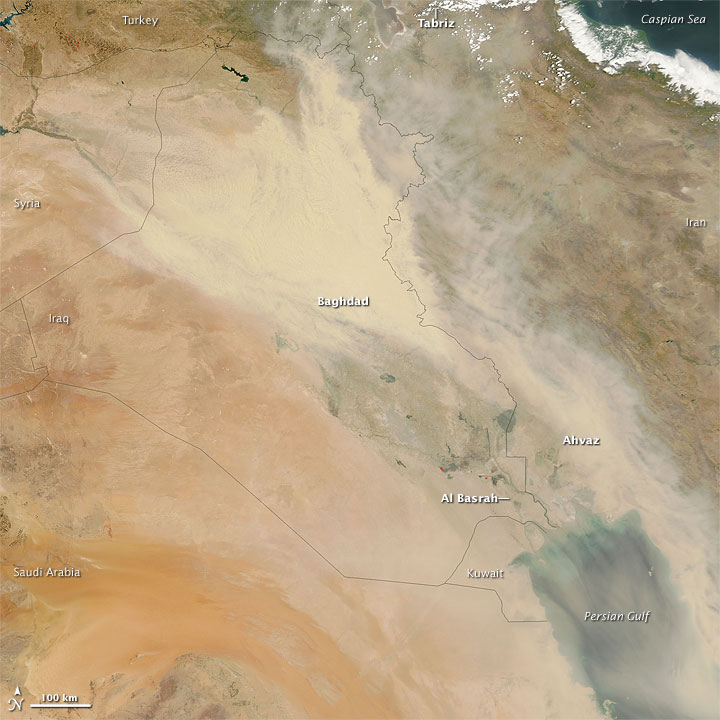 On July 4, 2009, a massive dust storm had persisted over Iraq for a week. The dust storm also spread toward the east and southeast, over Iran and the Persian Gulf. The Moderate Resolution Imaging Spectroradiometer (MODIS) on NASA’s Aqua satellite took this natural-color picture the same day.

Over much of Iraq, including Baghdad, the dust is thick enough to completely obscure the view of the land surface below. To the east and southeast, the dust is thin enough to show shadowy land and ocean surfaces beneath, although dust is very thick along the southern coast of Iran.

By July 5, 2009, Iraqi clinics had received several thousand patients seeking relief from dust-related symptoms, and three people had died, according to an article in The Miami Herald. The article also described an increase in the frequency of dust storms in the region. Dust storms in Iraq are typically started by a sand-stirring wind known as a shamal. Although shamals have long occurred in this region, other factors have contributed to a greater likelihood of such storms, including urbanization in areas previously devoted to agriculture, drought, military operations that remove sandy pavements that would otherwise cap dust, and upstream dams on the Tigris and Euphrates Rivers that reduce the water available to Iraq.