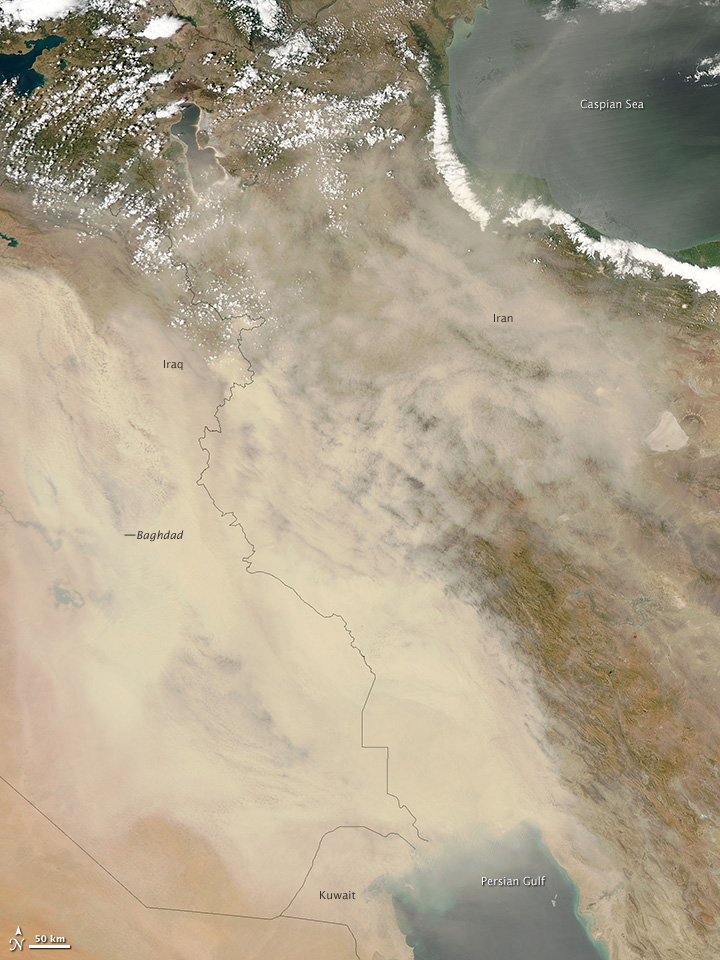 A terrible dust storm raged through Iraq in the first week of July 2009. According to news reports, many Iraqis considered the storm to be the worst in living memory. Hundreds of people reported to the hospital for respiratory distress, and the blowing dust interfered with air and land travel for nearly a week.

This natural-color (photo-like) image from the Moderate Resolution Imaging Spectroradiometer (MODIS) on NASA’s Aqua satellite shows the area at the height of the storm, on July 5. In places the dust is only a veil, and the landscape below is recognizable. Parts of the Tigris and Euphrates Rivers are visible. In other places, however, the dust is a thick blanket, completely blocking the ground from view. The city of Baghdad is hidden. An animation of images from July 1–6 shows the spread of the dust.

July and August are the hottest months of the year in Iraq. Temperatures can reach more than 120 degrees Fahrenheit. From mid-June through September, a northwest wind—the shamal—blows almost constantly. Periodically, the winds intensify to the 15 knots (about 17 mph) generally required to whisk dust off the ground. A drought has dried out wetlands and other pockets of moisture in the arid country, which increases the number of places where the shamal can pick up dust. The resulting dust storms can last for days.