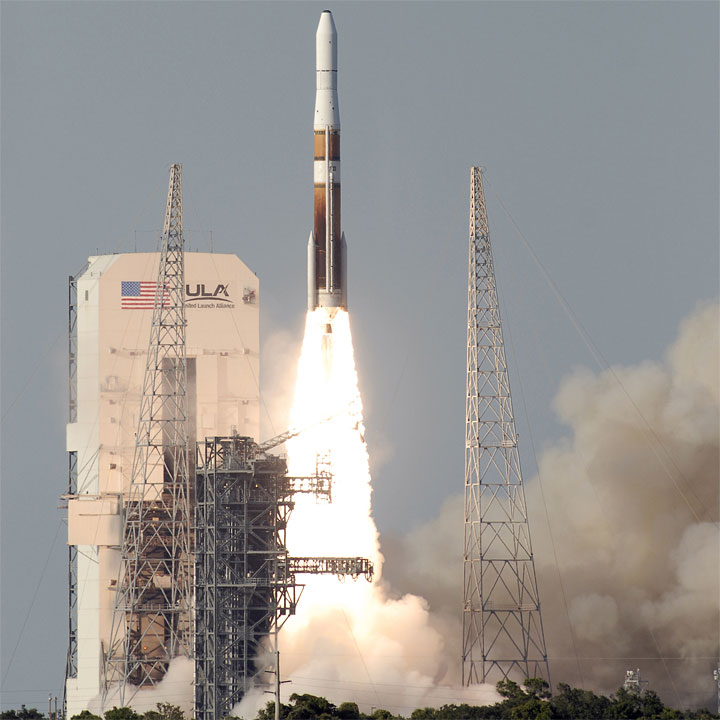 One of the most effective ways to monitor weather events is to fix an unblinking eye from the sky on a certain part of our planet. The Geostationary Operational Environment Satellites (GOES) operated by NASA, NOAA, and the U.S. Department of Commerce provide continuous monitoring of weather conditions. Orbiting the Earth’s equatorial plane at a speed exactly matching the planet’s rotation, satellites in the GOES network seem to hover over fixed spots. They monitor atmospheric conditions that lead to hurricanes, flash floods, tornadoes, and hail storms. GOES satellites also monitor volcanic plumes.

About four hours and 20 minutes after the launch, GOES-O separated from the Delta IV rocket. On July 8, 2009, GOES-O reached its planned orbit altitude of approximately 35,900 kilometers (22,300 miles) above Earth’s surface, at which point GOES-O became GOES-14.

As of early July 2009, two satellites in the GOES program are in operational mode. GOES-11 serves as GOES-West, monitoring the western half of the continental United States and the Pacific Ocean. GOES-12 serves as GOES-East, monitoring the eastern half of the continental United States and the Atlantic Ocean. GOES-13 is stored in orbit, ready to take over should an operational satellite fail. GOES-14 will likewise be stored in orbit, intended to observe atmospheric conditions over the eastern United Sates and Atlantic Ocean should the GOES-East satellite fail.

After the launch, control of GOES-14 is expected to change hands, with Boeing Space and Intelligence Systems handing over engineering control to NASA in July 2009, and NASA handing over operational control to NOAA five months later.