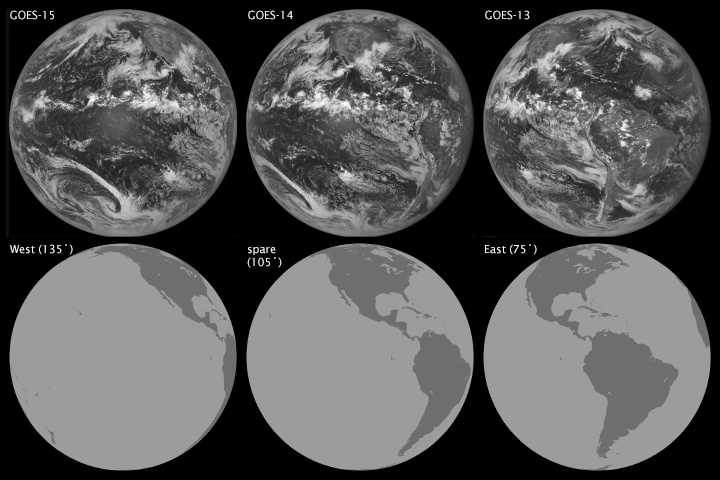 On September 12, 2012, unexpected herringbone and checkerboard patterns began to appear in imagery acquired by GOES-East, a key weather satellite that observes the eastern part of the United States. The problem grew worse in subsequent days.

By September 23, the distortion had gotten bad enough that National Oceanic and Atmospheric Administration (NOAA) engineers decided to take the spacecraft offline for troubleshooting. Losing one of the two geostationary weather satellites that National Weather Service meteorologists rely upon could have serious consequences at any time, but that was especially true in the midst of the 2012 hurricane season.

Fortunately, NOAA had planned ahead. The agency always keeps a “spare” satellite in orbit, ready to spring into action when problems arise. However, just two of the satellites are in active operations at any time.

The image above shows the field of view of all three weather satellites on September 15, 2012. GOES-15, which has served as GOES-West since December 2011, is on the left and orbits at 135 degrees west longitude; GOES-14, the spare, is in the middle and resides at 105 degrees west. GOES-13, the malfunctioning satellite that has served as GOES-East since April 2010, is on the right and sits at 75 degrees west. The top row of images shows visible images acquired by the three satellites on September 15, 2012. The lower row shows the field of view of each satellite.

When GOES-East went dark, engineers quickly put GOES-West into “full disk scan mode”, a special setting that allows the satellite to collect data over parts of the eastern United States that it doesn’t normally cover. That change, along with a patchwork of data from other polar-orbiting satellites, initially helped fill in the gap created by the loss of GOES-East.

On October 1, NOAA began moving toward a longer-term solution. GOES 14, the spare, began a maneuver that would send it drifting eastward until it reached the location of the malfunctioning GOES-East. Meanwhile, GOES-13 is being moved westward toward 89.5 degrees longitude for troubleshooting. (See this NOAA visualization for an animation that shows the maneuver.)

The spare began the maneuver on October 1 and has been moving east by about 0.90 degrees per day. It should reach its destination by the end of October, but its precise arrival date is not yet known. Orbital engineers have to execute a complex procedure in the last few days of the journey that will move the satellite into place and switch it on, explained GOES project scientist Dennis Chesters of NASA’s Goddard Space Flight Center. “It’s tricky,” Chesters said. “It’s comparable to changing your pants while driving your car.”

Down but not out, GOES-13 might still be set right by NOAA engineers. Despite the glitch, some parts of the satellite are still working fine. In fact, GOES-14 data continues to flow through a functioning communications system on GOES-13. That means users on the ground won’t have to repoint their antennas to get the data from GOES-14 during the transition, NOAA explained in an online update.