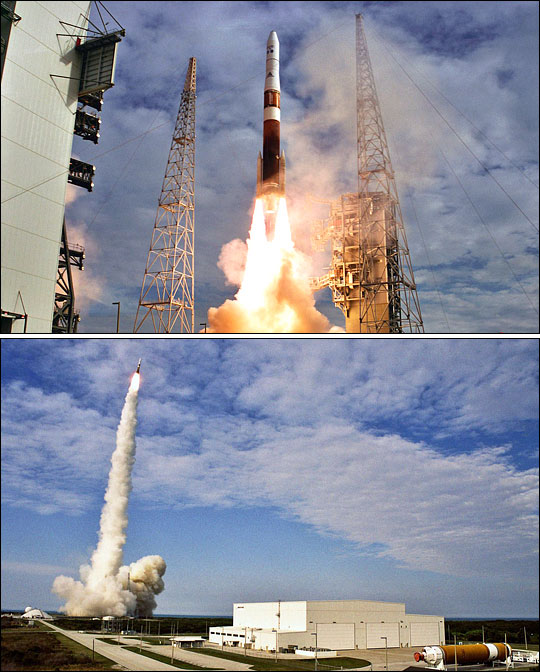 At 6:11 p.m., Eastern Daylight Time, on May 24, 2006, the roar of a Boeing Delta IV rocket shook Cape Canaveral Air Force Station in Florida as the GOES-N satellite successfully launched into space. GOES-N is the first of a new series of weather satellites that will provide forecasters with improved real-time information about atmospheric conditions throughout much of the Western Hemisphere. Like its predecessors, the earlier series of GOES satellites, GOES-N entered a geosynchronous orbit that allows the satellite to appear to “hover” in one spot as it follows the Earth’s rotation through its orbit. From this position, the satellite can view developing weather systems over the Central and Eastern Pacific Ocean; North, South, and Central America; and the Western and Central Atlantic Ocean at all times. This constant, real-time view provides essential information to forecasters at the National Weather Service that allows them to issue accurate advanced warnings of severe weather like hurricanes, tornadoes, hail storms, and heavy rain that can cause flash flooding.

Upon entering orbit, GOES-N became GOES-13. After engineers perform an initial checkout, GOES-13 will go into on-orbit storage mode so that it is ready to replace the currently operating GOES-10 or GOES-12 satellites should either fail. GOES-13 carries an Imager, a Sounder, and a suite of space-weather instruments. The Sounder and the Imager will provide constant information about Earth’s surface, oceans, severe storm development, cloud cover, cloud temperature and height, surface temperature, and water vapor. The space-weather instruments will monitor energy coming from the Sun to detect things like solar flares that can disrupt radio communications and Global Positioning System (GPS) signals.

The satellite’s development and launch was managed by NASA Goddard Space Flight Center, and the satellite was built by Boeing. The GOES Program is managed by the National Oceanic and Atmospheric Administration (NOAA).