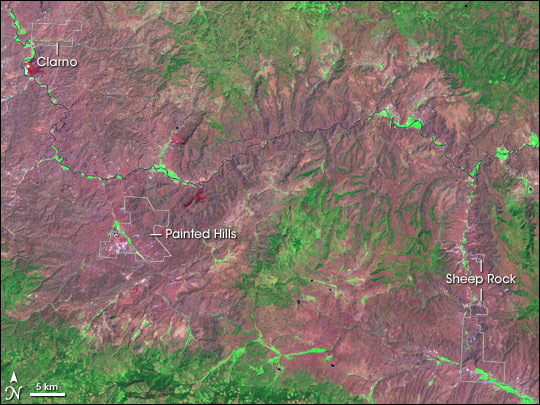 Established as a national park in 1975, the John Day Fossil Beds National Monument includes more than 14,000 acres in Oregon. The park does not occupy a single, seamless piece of land, but is instead spread out over three different areas. What all three parts have in common is that they are part of the drainage basin of the John Day River—a tributary of the Columbia River—and they include steep, mountainous terrain extending up from the riverbed. The steep mountain slopes cover large expanses of geologic time. Between them, these three pieces of the park include sediments deposited over a period of about 40 million years; the sediments include numerous plant and animal fossils.

Landsat 7’s Enhanced Thematic Mapper Plus (ETM+) captured this false-color image of the park on July 23, 1999. In this image, rocky ground appears pale pink. Small patches of deep red probably result from burn scars. Green indicates vegetation, and blue indicates water. The westernmost portion of the John Day Fossil Beds is the Clarno Unit. This part of the park preserves the remains of a 44-million-year-old landscape in which active volcanoes loomed over a lush rainforest, home to four-toed horses, brontotheres (extinct mammals that looked like rhinos), and crocodiles. To the south of the Clarno Unit is the Painted Hills Unit, named from the colorful hills banded with sediments ranging in color from yellow to black. The easternmost portion of the park is the Sheep Rock Unit, which preserves the remains of an ecosystem that existed from about 25 to 28 million years ago. That ecosystem consisted of hardwood deciduous forests that were home to three-toed horses, primates, and cat-like carnivores sporting saber teeth.

Today, the area around the park is a semi-arid environment, quite different from the warm, wet landscapes of its past. The national monument and the river are named after John Day, an early American trader and explorer. After explorers began spending more time in the area, the fossils they collected attracted the attention of a congregational minister and naturalist, Thomas Condon, who guided a Yale expedition in the area in the early 1870s.