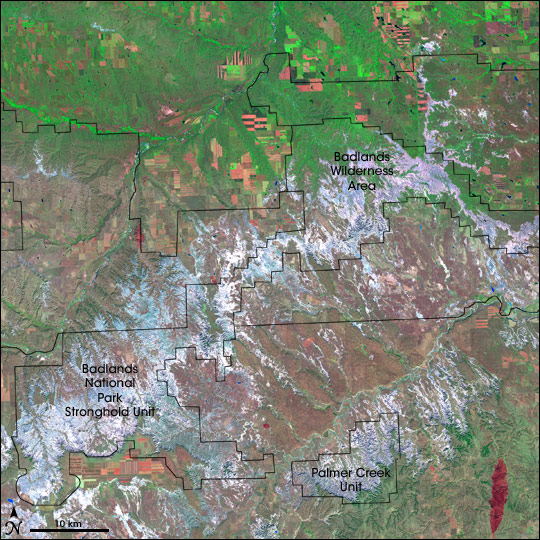 Badlands National Park is 100,000 hectares (244,000 acres) of rocky buttes, spires, and mixed-grass prairie in southwestern South Dakota. First established in 1939 as the Badlands National Monument, it was expanded and designated a national park in 1978. Although its name comes from its harsh weather and marginal conditions for agriculture, the area has been settled for the past 11,000 years. Portions of the park remain in the hands of the Oglala Sioux Tribe who co-manage the Stronghold and Palmer Creek Units of the park within the Pine Ridge Indian Reservation. The northern section of the park extends beyond the boundaries of this image, and the national park land is interspersed with the Buffalo Gap National Grassland.

This false-color satellite image of the area was created from data from the Enhanced Thematic Mapper Plus (ETM+) sensor on the Landsat 7 satellite collected on October 16, 2000. Vegetation appears bright green, while bare or thinly vegetated ground is tan or pink. Given the time of year, the pink rectangular features are most likely fields that have have been cleared of their summer crops. The bluish-white areas are bare rock surfaces of buttes and spires which form the spine of the parkland. The deep magenta vertical stripe in the lower right image is burn scar from a fire.