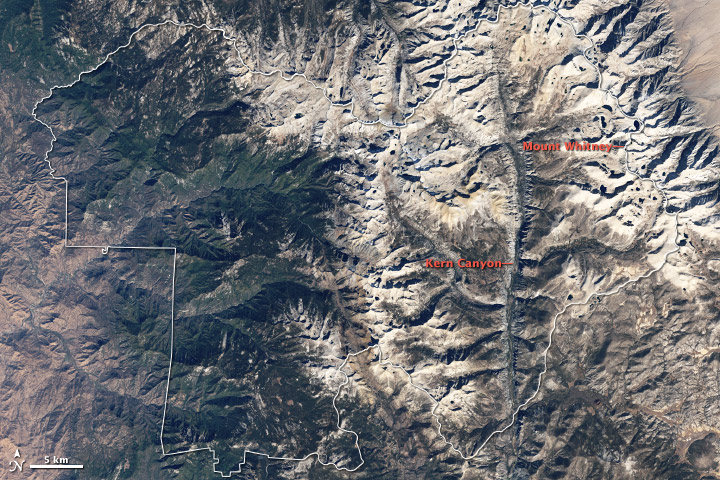 The Thematic Mapper sensor on NASA’s Landsat 5 satellite captured this true-color image of Sequoia National Park, outlined in white, on October 22, 2008. Sunlight illuminates southern slopes, leaving northern faces in shadow in this autumn image. In the west, deep green conifers carpet most of the land. These forested mountains are home to the park’s most famous giant sequoia trees.

The pale colors in the east come from a combination of land surfaces, including sparse alpine vegetation, snow, and bare rock. Some of the rocky areas occur at relatively low elevations; although plants could survive the climate, there is little to no soil on the granite surfaces. A deep canyon, carved by the Kern River, runs north-south through the eastern half of the park, and smaller east-west trending valleys connect with it along its route.

Sequoia National Park sits at the southern end of the Sierra Nevada mountains. Terrain alternates between extremes, from peaks such as Mt. Whitney—the highest peak in the contiguous United States—to deep caverns. The rivers and lakes in this region are part of a watershed valuable not only to the plants and animals of the park, but also to farms and cities in California’s Central Valley.