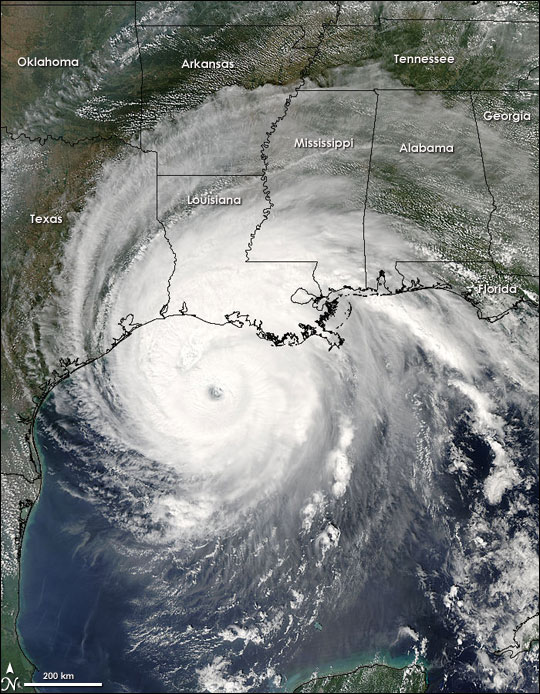 Hurricane Rita was slowly winding down as it approached the Louisiana and Texas shoreline on September 23, 2005. At 2:05 p.m. U.S. Central time, when the Moderate Resolution Imaging Spectroradiometer (MODIS) on NASA’s Aqua satellite captured this image, Rita was a dangerous Category 3 storm, down from the near-record-breaking Category 5 hurricane it was on September 21. At its core, Rita had sustained winds of 205 kilometers per hour (125 miles per hour) and stronger gusts. A mere two days earlier, the storm packed wind speeds of 275 kilometers per hour (170 miles per hour), making it the fourth most powerful storm ever measured.

In this image, the outer bands of the storm already extend well over Texas, Louisiana, Mississippi, and Arkansas, affecting many regions devastated by Hurricane Katrina on August 29. Over the Gulf of Mexico, Rita’s well-defined eye has clouded over. This closed or “dirty” eye shape is typical of a storm that has reached its peak strength and is slackening.

Although the center of the storm was being forecasted to come ashore in Texas near the Louisiana border, Rita will likely have a far-reaching effect. On the evening of September 23, the massive storm had hurricane-strength winds that reached 140 kilometers (85 miles) from the eye, with weaker tropical storm-strength winds that extended as far as 335 kilometers (205 miles) from the storm’s center. Rita will also bring heavy rain—up to 20 inches in some locations, the National Hurricane Center warned—high tides, and battering waves.

For more images of Hurricane Rita, please visit the Natural Hazards section of the Earth Observatory. For more information about Rita, see the National Hurricane Center.