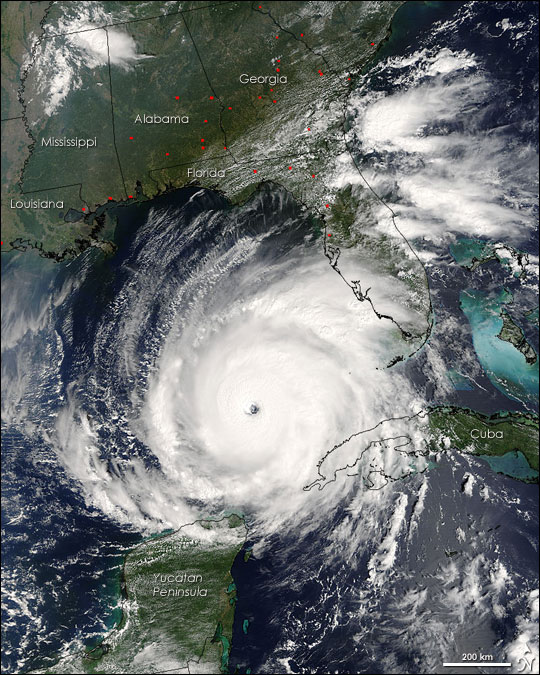 Rita was building into an extremely dangerous Category 5 hurricane when the Moderate Resolution Imaging Spectroradiometer (MODIS) on NASA’s Terra satellite captured this image at 12:10 p.m., U.S. Eastern time on September 21, 2005. The storm bears the markings of a powerful hurricane: it is compact and circular, with an open eye through which the deep blue waters of the Gulf of Mexico are visible. At the time this image was acquired, Rita had winds of 220 kilometers per hour (140 miles per hour) with gusts to 270 kph (170 mph). Within a few hours, the storm intensified to a Category 5 hurricane with sustained winds of 265 kph (165 mph).

Rita is the second Category 5 storm of the 2005 Atlantic hurricane season. The first was Hurricane Katrina, which devastated much of the Mississippi, Louisiana, and Alabama shoreline when it came ashore on August 29. Rita is expected to weaken slightly before coming ashore over the Texas or Louisiana coastline on September 23 or 24 as a major hurricane (Category 3 or higher).

In this photo-like image, the Gulf Coast of the United States frames the open water to the north, while the Yucatan Peninsula is visible to the south. MODIS detected several fires, marked with red dots, burning in the southeastern United States. The fires are probably agricultural fires. The large image has a resolution of 500 meters per pixel. It is available in additional resolutions, including MODIS’ maximum resolution of 250 meters per pixel, from the MODIS Rapid Response Team.