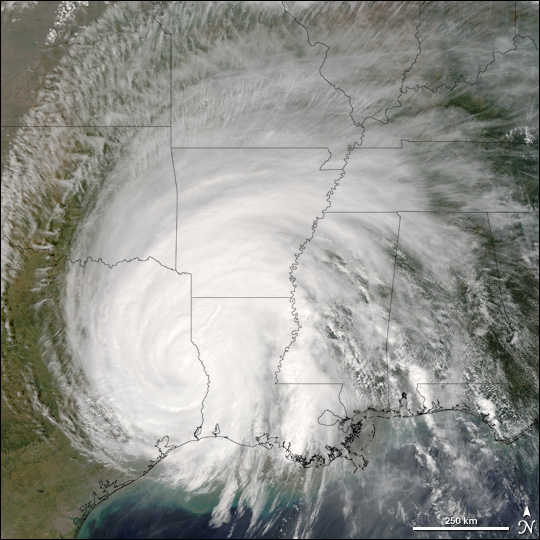 Hurricane Rita rapidly degraded from a hurricane to a tropical depression, despite still having an organized spiral structure more than a day after coming ashore on September 24, 2005. At 11:05 a.m. U.S. Central Time on September 25, 2005, when the Moderate Resolution Imaging Spectroradiometer (MODIS) on NASA’s Terra satellite captured this image, Rita was downgraded to a tropical depression, down from the near-record-breaking Category 5 hurricane it was on September 21, and the Category 3 hurricane was when it made landfall. By this time, sustained winds were down to 40 kilometers per hour (25 miles an hour). Fears that Rita would move very slowly and rain very heavily as it passed have fortunately proven to be somewhat exaggerated.

In this image, the outer bands of the storm extend over several states and encompass the city of New Orleans, affecting many regions devastated by Hurricane Katrina on August 29. Many levees only partially repaired from Katrina were seeping water from the storm surge and rainfall from Rita, and at least two breaches in major levees in the city were re-opened and flooded low-lying parts of the city once again.

For more images of Hurricane Rita, please visit the Natural Hazards section of the Earth Observatory. For more information about Rita, see the National Hurricane Center.