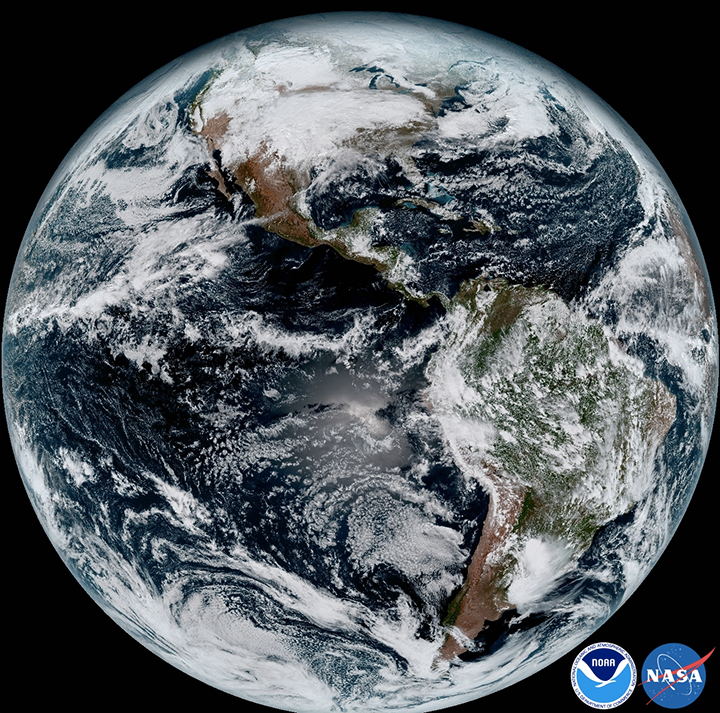 In November 2016, the GOES-R satellite lifted off from Cape Canaveral, Florida, carrying next-generation instruments and imagers primarily geared toward weather forecasting. After taking several weeks to reach geostationary orbit and a few more weeks for setting up and calibrating instruments, the satellite now known as GOES-16 has sent back its first images.

The color images on this page were acquired on January 15, 2017, by the Advanced Baseline Imager (ABI) on GOES-16. The satellite is operated by the National Oceanic and Atmospheric Administration (NOAA), which includes the National Weather Service. NASA helps develop and launch the GOES series of satellites, which observe Earth from about 36,000 kilometers (22,000 miles) above the equator.

The image at the top shows the full disk of the Western Hemisphere as observed by GOES-16 at 1:07 p.m. Eastern Standard Time on January 15. The second image (below) shows the new image alongside one taken by GOES-13 at the same time. Note that cloud and continental features are slightly offset because of the different positions of the satellites: GOES-16 is located at 89.5 degrees West longitude, while GOES-13 observes from 75 degrees West. The last image shows a close-up of North America that day, as a vast winter storm spread across the continent.

ABI can provide a full-disk image of Earth every 15 minutes and an image of the continental United States every five minutes. The instrument also allows the GOES team to target areas of severe weather, wildfires, volcanic eruptions, and other environmental phenomena as often as every 30 seconds. ABI observes the planet in 16 spectral bands, compared to five bands observed by existing U.S. geostationary meteorological satellites.

The spatial resolution of ABI is four times better and the scanning rate five times faster than previous GOES satellites. Those improvements should help meteorologists better distinguish between clouds, water vapor, smoke, ice, and volcanic ash in the atmosphere. The camera was built by the same team that made the Advanced Himawari Imager on Japan’s Himawari-8 satellite.

“One of our GOES-16 scientists compared this to seeing a newborn baby’s first pictures—it’s that exciting for us,” said Stephen Volz, director of NOAA’s Satellite and Information Service. “The incredibly sharp images are everything we hoped for based on our tests before launch.”

Later this year, NOAA will announce a final location for GOES-16, as it will be moved into orbit to replace either the GOES-East or GOES-West satellite by the end of 2017. In addition to observing weather on Earth, GOES-16 carries instruments for monitoring solar activity and space weather. 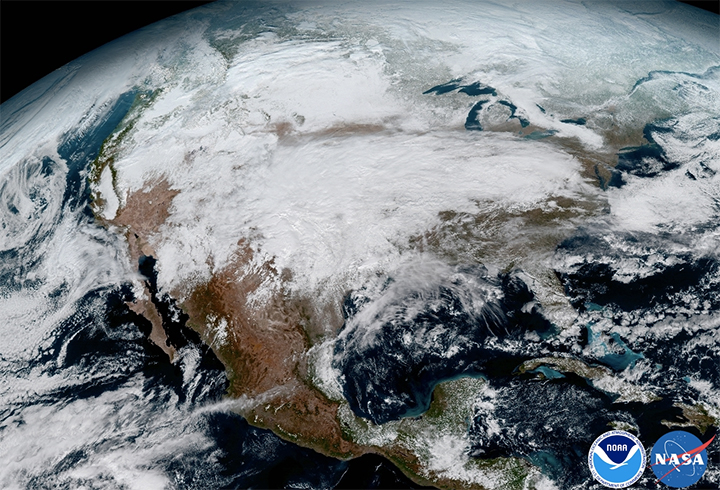 NASA/NOAA GOES-R image courtesy of the NOAA National Environmental Satellite, Data, and Information Service (NESDIS). Caption by Mike Carlowicz, based on reporting and information from John Leslie, Lauren Gaches, and Connie Barclay of the National Oceanic and Atmospheric Administration.