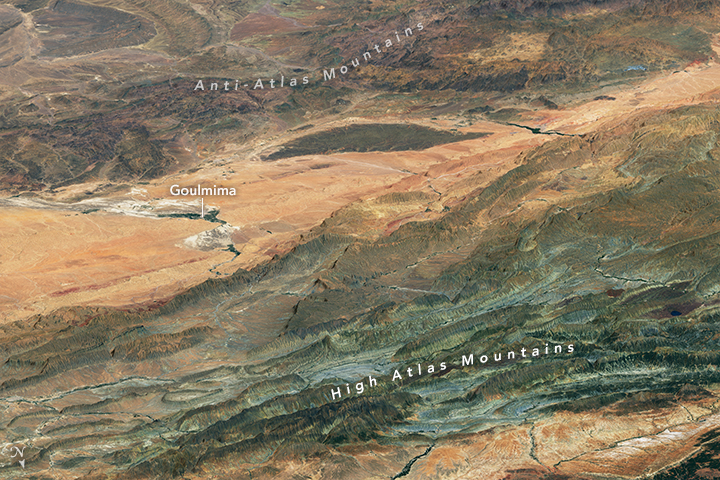 If you ever fly over the High Atlas Range in Morocco, look down. You will be treated to a visual spectacle that you will not soon forget. Massive layers of colorful rock crumpled up like pieces of paper. Sharp ridges bobbing and weaving their way across the desert. Splotches of black basalt spilled by ancient volcanoes. Zebra-like, layered outcrops of rock jutting from valleys at odd angles.

The High Atlas Mountains extend in a northeasterly direction from Morocco’s Atlantic coast (near Agadir) for hundreds of miles inland toward the Algerian border. The western portion of the range is home to its tallest mountains, with peaks that stand above 4,000 meters (13,000 feet). Elevation diminishes somewhat toward the central and eastern sections, but the scenery is no less eye-catching.

On July 2, 2016, the Operational Land Imager (OLI) on Landsat 8 captured this natural-color image of rugged terrain in the eastern part of the range. The OLI image has been draped on a digital elevation model made with data from the Advanced Spaceborne Thermal Emission and Reflection Radiometer (ASTER) sensor on the Terra satellite. From this oblique perspective, the Anti-Atlas mountains are visible in the distance beyond the city of Goulmima. Note that north is at the bottom of this image.

The Atlas Mountains were shaped by geological processes at work over hundreds of millions of years. One key step occurred in the early Jurassic Period (201 to 174 million years ago), when many of the world’s continents were still bunched closely together following the breakup of the supercontinent Pangea. This part of Morocco fell within the African plate, near a boundary with the Eurasian and North American plates. As the three plates separated, the crust thinned so much that a tear opened up and formed a rift valley that eventually filled with ocean water. 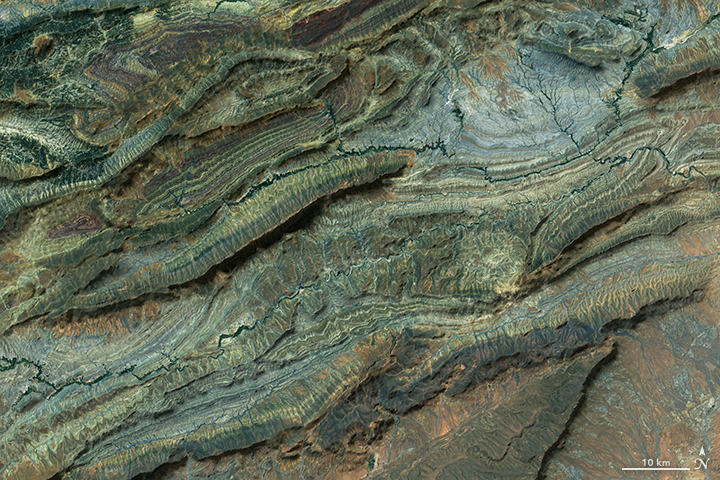 As the crust thinned and the rift opened up, large blocks of Earth’s crust dropped downward, creating broad valleys known as (grabens). Grabens have elevated blocks at their edges called horsts that became fault-block mountains. These mountains were pushed up even higher during a later phase of intense mountain building in the Cenozoic (66 million years to present), spurred by the collision of African and Eurasian tectonic plates.

The second image is centered near the small village of Taribante and shows a closer view of several streams running between a colorful series of ridges. The ridges are made up of purple, green, white, and black layers of sedimentary rock that formed at the bottom of a shallow ocean.