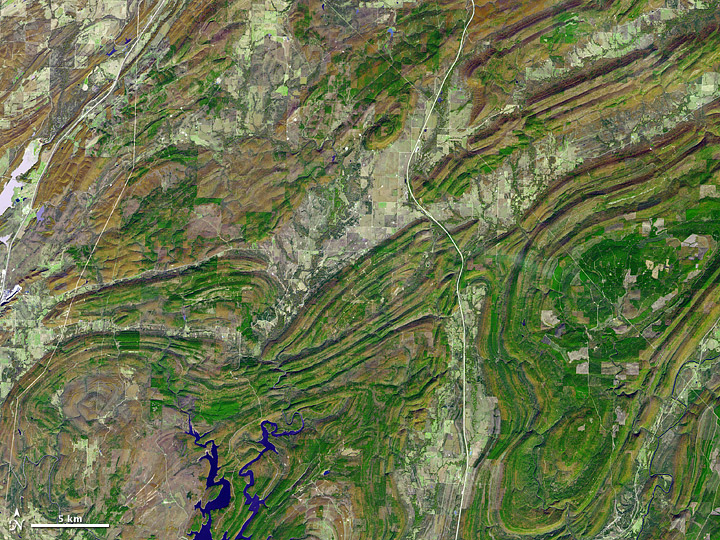 Prairies stretch across much of Oklahoma, but the state also holds mountain ranges, including the Ouachita Mountains in the southeastern corner. Formed over 300 million years ago, these mountains are a highly eroded remnant of a much larger range, one that may have stretched from Texas into southeastern Canada.

The Ouachita Mountains record a complicated geologic history spanning hundreds of millions of years. Long before the first dinosaur evolved, what is now the southern central United States sat at the bottom of an ancient sea. From roughly 550 to 340 million years ago, the area collected sediments eroding off nearby continents, as well as detritus of sea life.

Starting around 340 million years ago, a tectonic plate that had previously been attached to Africa and South America collided with the North American plate. The process helped form the supercontinent of Pangaea, and it thrust the ancient sea floor skyward. The similarities between rock layers of the Ouachita Mountains and the Appalachian Mountains indicate that they were part of a massive mountain chain formed by this collision. Once elevated, the mountains soon commenced eroding.

About 200 million years ago, Pangaea began to break apart. The breakup wrenched apart the supersized mountain range, leaving a wide swath of low-lying land between the Ouachita Mountains in the west and the Appalachian Mountains in the east. Low-profile land persists today across much of the southeastern United States.