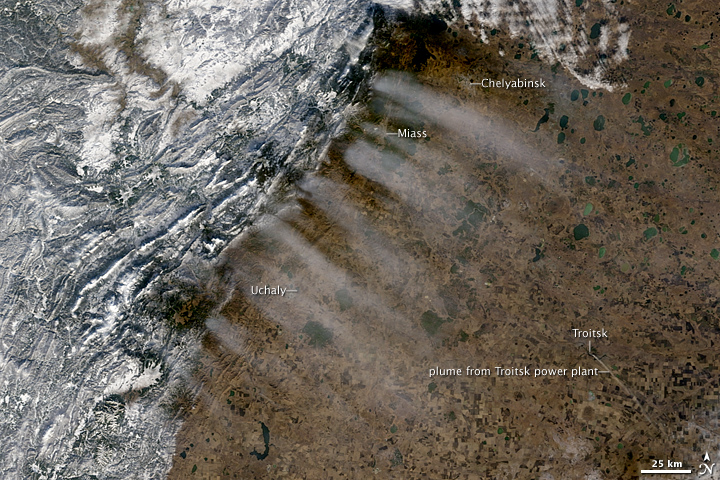 Sometimes, a single second, a snapshot in time, conveys the essence of the minutes and hours that preceded or will follow it: a ball poised to fly through outstretched arms into a net, or a toddler lifting her foot while reaching towards her father's hands. This photo-like image shows one such moment. It paints a picture of the movement of air and weather over the Ural Mountains in southern Russia, illustrating patterns that likely influence the lives of those who live in the region.

The Moderate Resolution Imaging Spectroradiometer (MODIS) on NASA’s Terra satellite captured the image at 12:20 p.m. local time on November 13, 2008. The most obvious pattern shown in the image is the influence of the mountains on precipitation, in this case, snow. A storm moving from the west bumped up against the Ural Mountains. The mountains tend to wring the moisture out of storms, and so, the western mountains are covered in snow, while the land to the east, on the lee side of the mountains, is bare.

The image also shows how the mountains shape the movement of air. When the image was taken, a strong wind was blowing from the west to the east. The air hit the mountains and was pushed up. The rising air cooled, forming high, thin clouds on the lee side of the mountains. The clouds streak east with the strong wind. The irregularities in the size of the clouds are likely caused by the uneven height of the mountains. Taller, broader peaks force a larger body of air to rise higher, creating a larger cloud than smaller peaks might. Such clouds frequently form on the lee side of mountains, but they more often have the ripple shape exhibited by the cloud along the top edge of the image. This wavy shape mirrors the rise and fall of air after it is disturbed by the mountains. The clouds are probably more dense in the north because that air likely holds more moisture.

The land to the east of the mountains holds evidence that the region is populated. The land is checkered, the straight lines and even shapes pointing to agriculture. Cities—Chelyabinsk, Miass, Uchaly, and Troitsk—are gray dots against the brown, winter landscape. A faint plume rises from Troitsk in the lower right corner of the image. The most likely source for the plume is a large power plant in or near the city.