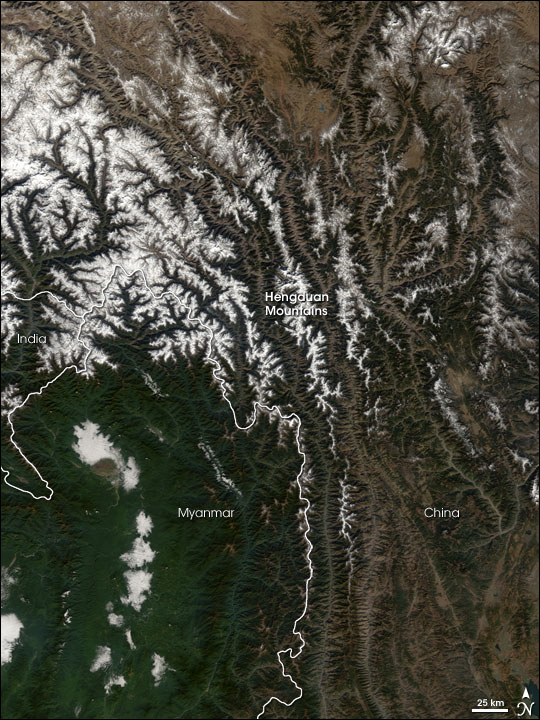 In southwestern China, just northeast of the borders of India and Myanmar, lies a mountain range known as the Hengduan Shan (sometimes Heng-tuan Shan). The mountains run generally north-south with a slight tilt toward the west at their northern end. Like all mountain ranges, the Hengduan consist of peaks and valleys, but these mountains provide an exceptional range of climates, due to changes of both elevation and latitude. While some valleys are frost-free throughout the year, some mountain peaks sport glaciers.

The Moderate Resolution Imaging Spectroradiometer (MODIS) on NASA’s Terra satellite captured this image of the mountain range and the surrounding area on December 25, 2000. Taken near the start of the northern hemisphere winter, the picture shows plenty of snow-capped mountains, the icy whiteness forming dendritic patterns atop ridges. Just below the snowcaps are forested slopes. The valley floors appear primarily brown, contrasting with the lush greenness of neighboring lowlands in Myanmar. Yet the seeming brownness in the Hengduan Mountains can be misleading. These mountains actually support some of the world’s greatest diversity of flowering plants.

The vegetation of the Hengduan Mountains includes many species that would be surprisingly familiar to gardeners from across the world. These mountains are where many of the flowers so popular in gardens first evolved—geraniums, lilies, and lady slipper orchids, to name just a few. In fact, the mountains of southwestern China are home to an estimated 12,000 species, and roughly 3,500 of them are endemic, found naturally nowhere else. Although prized by botanists, the Hengduan Mountains’s biodiversity is under threat from overgrazing, firewood collection, and development.

You can download a 250-meter-resolution KMZ file of the Hengduan Mountains suitable for use with Google Earth.