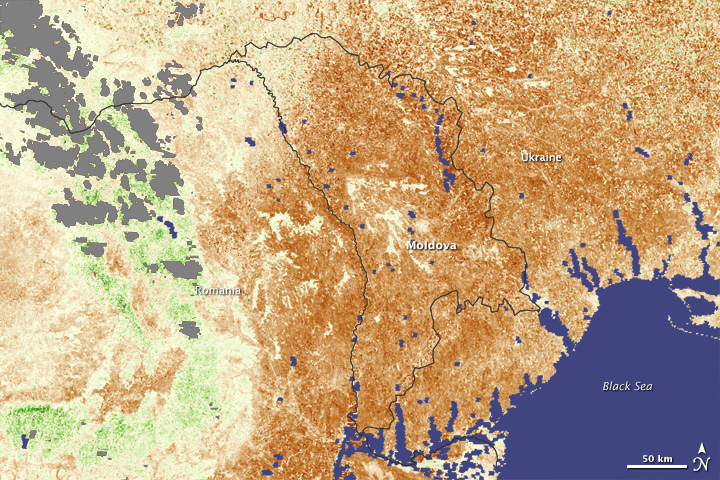 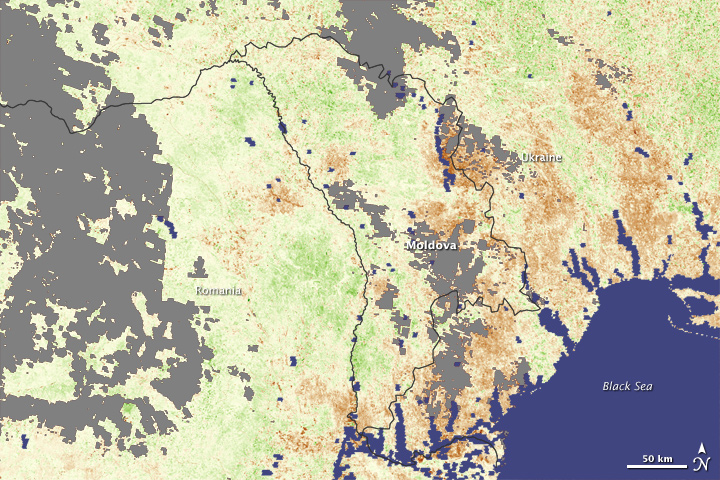 “Moldova’s 2007 drought has been the most severe in living memory,’ said the United Nations World Food Program in a special report issued on September 25, 2007. The 2007 drought was the worst in a series of nine dry periods to settle over the country since 1990, and the World Food Program compared its severity to the drought of 1946 during which many Moldovans starved.

The impact of the drought on plants in Moldova and parts of Ukraine and Romania is illustrated by this pair of images. The images are vegetation anomaly images, which indicate how quickly plants were taking in light and growing. Areas that are green are regions where plants were larger and leafier (leading to more photosynthesis) than they were on average from 2000 through 2006. Brown areas show where plants were smaller or less leafy than average, in this case as a result of drought. Gray areas indicate where clouds blocked the ground from view throughout the observation period, and blue is water.

The images were made with data collected by the Moderate Resolution Imaging Spectroradiometer (MODIS) on NASA’s Terra satellite. The top image is a compilation of daily data collected between July 28 and August 12, 2007, when the impact of the drought was at its greatest. Summer crops, such as corn and sunflowers, were in a critical stage of development, during which water was essential. The deep brown tone that covers all of Moldova reveals that the hot, dry weather devastated plants. Conditions observed in this image match reports from the ground. Cereal grain production was down 70 percent compared to average yields over the past five years, and other crops, like corn, sunflowers, grapes, and pasture for livestock also suffered, said the World Food Program. Food production from home gardens, the mainstay food supply of about 70 percent of Moldova’s population, dropped, and food prices went up.

The lower image, from August 29 through September 13, reveals just how much conditions can change in a single month. Some of what had been brown is brushed with green where plants responded to rainfall. Helpful though the rain evidently was to those plants that were still growing, it arrived too late to improve crop conditions, said the U.S. Department of Agriculture’s Foreign Agricultural Service.