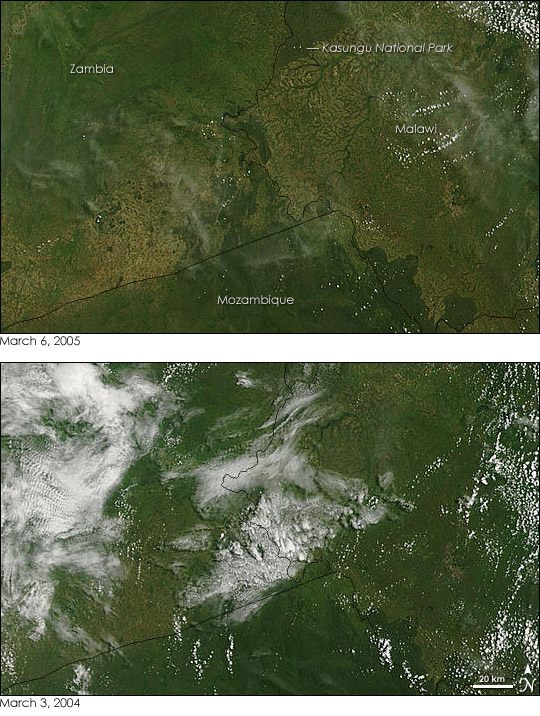 By December 1, 2005, many countries in southeastern Africa were facing food shortages for the fourth year in a row. The United Nations Food and Agriculture Organization reported that as many as 10 million were in need of food aid in Zambia, Malawi, Zimbabwe, Mozambique, Lesotho, and Swaziland. The most severe shortages were in Malawi and Zambia, both of which declared a national disaster, and in Zimbabwe.

Though hunger can result from sudden natural disasters like earthquakes, storms, or floods, most famines take months or years to develop. This food shortage is no exception. In February 2005, the rains needed to water developing crops failed to fall, and the drought resulted in a poor harvest. The effects of the drought on the landscape are clear in the images above. The Moderate Resolution Imaging Spectroradiometer (MODIS) on NASA’s Terra satellite took the top image on March 6, 2005, just after the dry spell in February. The lower image was taken on March 3, 2004. Although clouds cover part of the scene in 2004, most of the region is green with growing plants. In 2005, by contrast, the landscape is largely brown. The contrast between the bright green river-fed plants in Malawi and the surrounding rain-fed lands is much greater than it was in 2004. The preserved Miombo woodlands in Kasungu National Park in the top of the image remain green while the surrounding human-altered landscape has browned in the drought. The primary crop grown in this region is maize.

The images illustrate the value of satellite data in monitoring crops during a drought. Satellite data can show how weather conditions affect crops over a wide region. This big-picture perspective allows organizations like the Food and Agriculture Organization and the U.S. Department of Agriculture’s Foreign Agricultural Service (FAS) to estimate the size of a harvest months in advance. In this case, FAS lowered production estimates for Zambia, Malawi, and Zambia in April 2005 as the harvest was beginning. Mobilizing the food aid pipeline requires timely crop production estimates at or slightly before harvest time so that food aid can arrive 6-8 months later, when the “hunger season” traditionally sets in. Without the early warning that such estimates give, aid would not arrive until long after it is needed. By December 2005, when the food shortages came to the attention of international media, analysts were already monitoring the next season’s crops, to be harvested in April and May 2006.

NASA images courtesy the MODIS Rapid Response Team at NASA GSFC. Caption information courtesy Curt Reynolds of the Production Estimates and Crop Assessment Division of the USDA Foreign Agricultural Service as part of the Global Agricultural Monitoring Project, a partnership between NASA, FAS, and the University of Maryland.