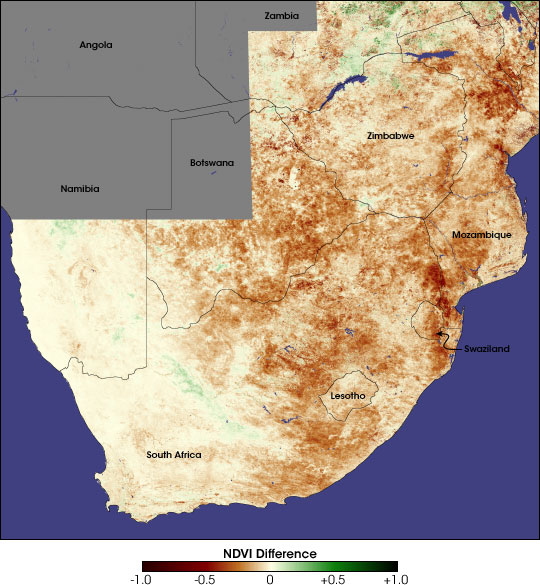 As many as ten drought-stricken countries in Southern Africa may be facing food shortages as dry soils in December and early January choked summer crops. Northeastern South Africa, Lesotho, and Swaziland have received less than 50 percent of the normal rainfall. Parts of Mozambique, Zimbabwe, and Malawi reported 50-80 percent less rain this season than average. Namibia, Tanzania, Zambia, and Botswana have also been plagued with dry weather.

This Normalized Difference Vegetation Index image made from data collected by the Moderate Resolution Imaging Spectroradiometer (MODIS) shows the extent of the drought. The image compares the amount of vegetation on the ground during the first sixteen days of January 2004 to an average of ground vegetation for the same period during 2001, 2002, and 2003. The prevalence of brown along the east coast indicates far less vegetation this year than the average of the previous three. Wisps of green show more vegetation than the three-year average. Clouds covered the ground in the southwest (gray area, upper left) frequently enough in the 16-day period that a comparison could not be made.

Heavy rain in late January improved the water outlook for some regions, but it may have also damaged crops. Further, the rain came too late, and many farmers could not plant because of a lack of water. Those farmers who planted later are faced with a short growing season before winter returns to the Southern Hemisphere, and that reduces the size of the crop that can be produced.

According to news reports, Lesotho, Swaziland, and Mozambique are headed towards massive crop losses. Along with South Africa, these countries are entering their third season of below-average rainfall, increasing their vulnerability to drought. In Lesotho, an enclave of South Africa, aid workers expect a complete crop failure. Those crops that have not been withered by a lack of water have been heavily damaged by pests. Between 600,000 and 700,000 people, about a third of the country’s population, are expected to require food aid this year.

Zimbabwe is also experiencing its third year of drought. The United Nations estimates that two-thirds of Zimbabwe’s rural population will need food aid in February and March. Drought has not been the only crippling influence on agriculture in Zimbabwe: high costs and shortages of fuel, seed, and fertilizers have also limited food production.

Typically, food aid agencies buy surplus corn from South Africa to provide aid to other South African countries. This year, however, estimates show that South Africa may not have enough corn for its own needs. The Foreign Agricultural Service (FAS) at the United States Department of Agriculture reports that less land has been planted in corn than at any time in the past 50 years, which means that the country may have to import yellow corn. (See South Africa: Planted Corn Area at Historic Lows.) On January 16, South Africa’s President Mbeki declared six of the country’s nine provinces disaster areas. A seventh province, Limpopo, had already been declared a disaster area. The South African Cabinet pledged 250 million Rand (about $36 million U.S.) for drought relief, with the possibility of issuing another 500 million Rand ($72 million U.S.) later in the year.

Image based on data provided by Matthew C. Hansen, University of Maryland