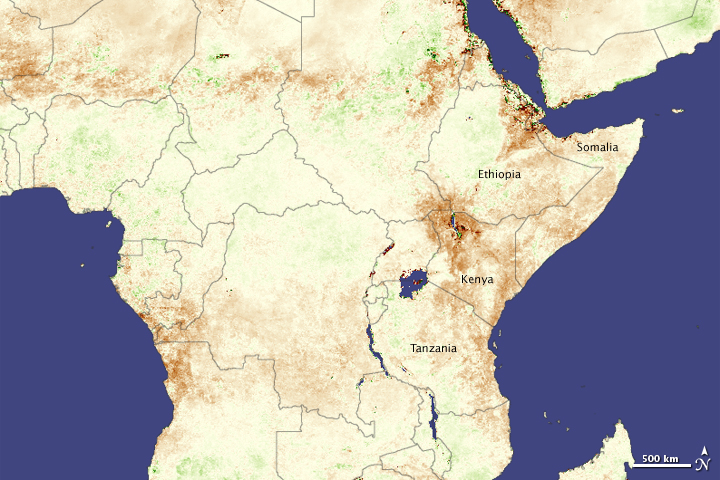 Rain began to fall over the drought-parched East African landscape in October 2009, marking the beginning of the rainy season. The previous rainy season of 2009 brought little moisture, and 2007 and 2008 had also been dry. The resulting drought shriveled crops and pastureland, dried rivers and reservoirs, and left nearly four million people in need of food aid in Kenya alone, said the World Food Program. This image shows the cumulative effect of the drought on vegetation just as the drought-breaking rains began to fall.

The image compares the growth of plants between July 21 and October 10, 2009, to the average growth observed over the same period from 2002–2008. The image shows how well plants were growing in the roughly two-and-a-half month period from the end of the poor rainy season early in the year to the beginning of the next rainy season in October. Green areas show better-than-average growth, tan areas reflect average conditions, and brown areas show poorer-than-average growth.

The drought had a punishing impact on the area’s vegetation. The brown tones across East Africa indicate that plants grew significantly less well between July and October 2009 than in previous years. The most severe impact of the drought is centered on northwest Kenya. October 2009 brought heavy rain to much of East Africa, and plants started to recover, said the World Food Program. The intense rain falling on dry, hard ground also triggered destructive floods, said the United Nations.

Satellites measure vegetation by recording the way plants reflect and absorb sunlight, which is an indication of how well they are photosynthesizing and growing. This image is based on vegetation data collected by the Advanced Very High Resolution Radiometer on the NOAA-17 POES satellite.