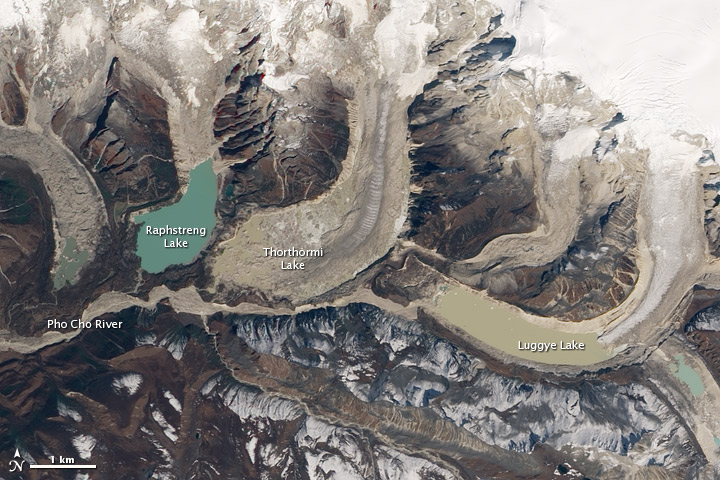 As glaciers grind their way across the landscape, they pile up rocky debris, forming moraines. At the terminus of a glacier, moraines can act as natural dams for lakes filled with melt water. When they fail, they can create catastrophic glacial outburst floods. On October 7, 1994, in the Bhutan Himalaya, a partial collapse of a moraine along the edge of the Luggye Lake released a glacial outburst flood that killed 21 people and swept away livestock, crops, and homes.

This natural-color image of the southern slopes of Bhutan’s Table Mountain shows where the 1994 glacial outburst flood occurred. Luggye Lake broke through the moraine at the southwest corner, and the flood scoured a path down the Pho Cho River. Unfortunately for residents down the valley, Luggye is not the only dangerous glacier in the region. Officials are also concerned about the Thorthormi Glacier Lake and the unstable moraine separating it from Raphstreng Lake, to the west.

Raphstreng Lake is roughly 80 meters (260 feet) lower in elevation than the lake forming at the terminus of Thorthormi Glacier, and an outburst flood from Thorthormi into Raphstreng could easily cause the lower lake to overflow as well. The combined outpouring of meltwater and rock debris could be even more devastating than the 1994 disaster.

To reduce the likelihood of a glacial outburst flood, Bhutan has begun a project to lower the water levels of both glacial lakes. In an area where heavy equipment could tumble down the slopes, the government of Bhutan has relied on human muscle and low-tech tools to widen the outlet channels and allow the lake water to drain in a more controlled way.