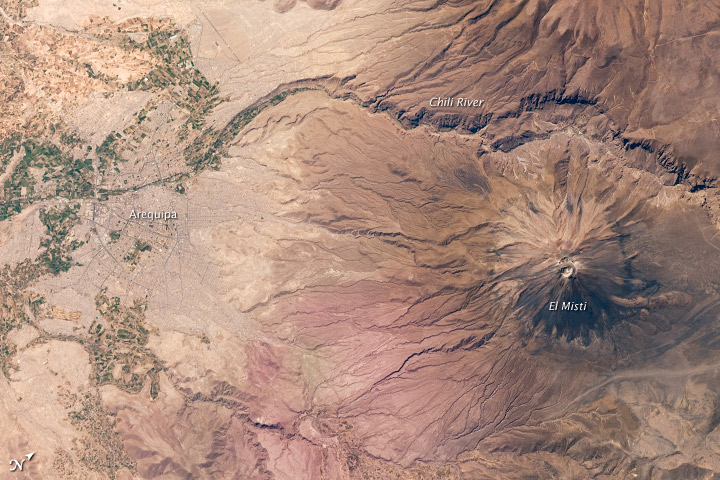 Several Latin American cities have grown up on the flanks of active volcanoes. This mosaic of two astronaut photographs illustrates the closeness of Arequipa, Peru, to the 5,822-meter- (19,100-foot-) high El Misti Volcano. The symmetric conical shape of El Misti is typical of a stratovolcano, a type of volcano characterized by alternating layers of lava and debris from explosive eruptions, such as ash and pyroclastic flows. Stratovolcanoes are usually located on the continental crust above a subducting tectonic plate. The magma feeding the stratovolcanoes of the Andes Mountains, including El Misti, is associated with ongoing subduction of the Nazca Plate beneath the South American Plate. El Misti’s most recent—and relatively minor—eruption occurred in 1985.

The city center of Arequipa, Peru, lies only 17 kilometers (11 miles) away from the summit of El Misti; the gray urban area is bordered by green agricultural fields (image left). With almost 1 million residents in 2009, it is the second largest city in Peru in terms of population. Much of the building stone for Arequipa, known locally as sillar, is quarried from nearby pyroclastic flow deposits that are white. Arequipa is known as the “White City” because of the prevalence of this building material. The Chili River extends northeastwards from the city center and flows through a canyon (image right) between El Misti volcano and Nevado Chachani to the north. Nevado Chachani is a volcanic complex that may have erupted during the Holocene Epoch (from about 10,000 years ago to the present), but no historical eruptions have been observed there.

Astronaut photographs ISS021-E-8370 and ISS021-E-8371 were was acquired on October 16, 2009, with a Nikon D2Xs camera fitted with a 180 mm lens, and are provided by the ISS Crew Earth Observations experiment and Image Science & Analysis Laboratory, Johnson Space Center. The image was taken by the Expedition 21 crew. The image in this article has been cropped and enhanced to improve contrast. Lens artifacts have been removed. The International Space Station Program supports the laboratory to help astronauts take pictures of Earth that will be of the greatest value to scientists and the public and to make those images freely available on the Internet. Additional images taken by astronauts and cosmonauts can be viewed at the NASA/JSC Gateway to Astronaut Photography of Earth. Caption by William L. Stefanov, NASA-JSC.