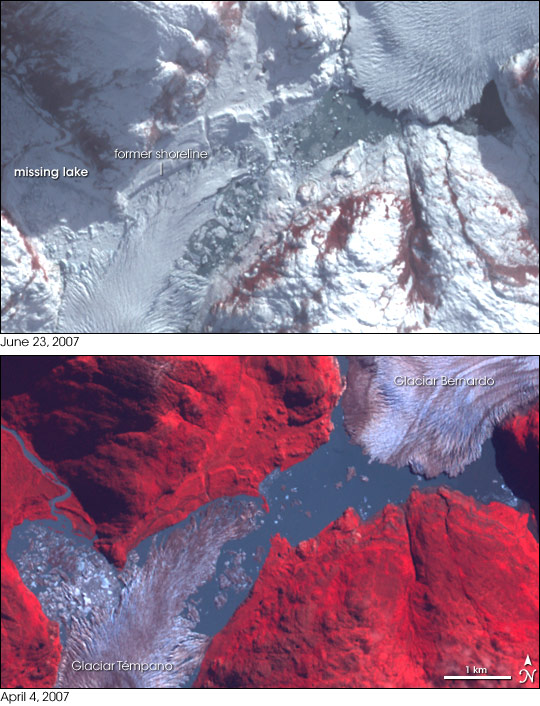 In May 2007, the Chilean Forestry Corporation discovered that a lake in the Southern Patagonia Icefield in the Chilean Andes had disappeared. Chilean glaciologists had observed the 20,000-square-meter (roughly 215,000-squre-foot) lake, which was located between the tongues of the Glaciar Témpanos and Glaciar Bernardo, in March. (Glaciar is Spanish for “glacier.”) Two months later, nothing remained except a 30-meter- (100-foot-) deep crater and some stranded ice that had once floated on the water’s surface.

The Advanced Spaceborne Thermal Emission and Reflection Radiometer (ASTER) instrument on NASA’s Terra satellite captured the top image on June 23, 2007, showing a crater that the lake had occupied. In this image, the crater lies mostly in shadow, due to the low angle of the Sun during the Southern Hemisphere’s winter. Despite the shadows, contour lines around the lake show where the ground level is lower than the surroundings. East of the drained lake, water still appears near the tongue of Glaciar Bernardo. In this image, made from a combination of visible and infrared light detected by ASTER, red indicates vegetation, and patches of red peek through the snow cover. ASTER acquired the bottom image on April 4, 2007, when the lake was still in place. In this image—acquired in the Chilean autumn—both the lake and a nearby tributary appear full, shown by the blue-tinted water. Vibrant red, lush vegetation covers the landscape.

Although the sudden draining of a lake is rare, it is not unheard of. One explanation that scientists proposed was an earthquake in the region that measured 6.2 on the Richter scale. Earthquakes can open up fissures in the rock, giving water an escape route. Another explanation was more prosaic: melting. Blocks of ice dam many glacial lakes, and when the ice melts, the lake can drain away. Sometimes a lake can drain in a rapid deluge, known as a glacial lake outburst flood.

After flying over the region in late June 2007, scientists from Centro de Estudios Cientificos (CECS) and the Chilean Navy concluded that the likely culprit for the lake’s disappearance was such a flood. Dr. Andrés Rivera, a glaciologist from CECS, described the flow. “The lake’s water flowed to the north along the western margin of Glaciar Bernardo and into a big hole, where the water went down into a glacier tunnel in the direction to Bernardo Fjord,” he said. Bernardo Fjord empties into the Pacific Ocean.

You can also download a 15-meter-resolution KMZ file of the region around the “missing” lake, including both April 4 and June 23, 2007, images, suitable for use with Google Earth.