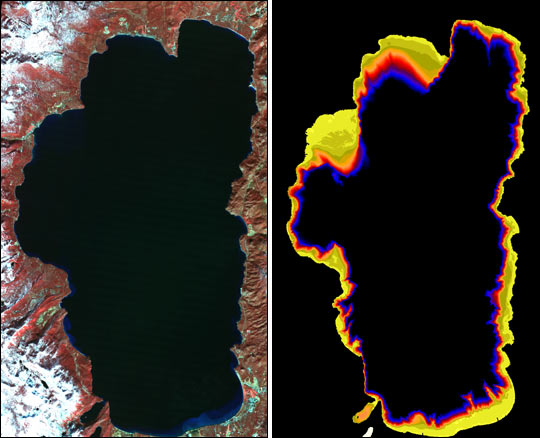 Images from the Advanced Spaceborne Thermal Emission and Reflection Radiometer (ASTER) aboard NASA’s Terra satellite, launched in December 1999, illustrate the state of gradually decreasing water clarity in Lake Tahoe, one of the clearest lakes in the world.

In the image on the left, acquired in November 2000, vegetation can be seen in red. The image on the right, acquired at the same time by a different spectral band of the instrument, is color coded to show the bottom of the lake around the shoreline. Where the data are black, the bottom cannot be seen.

Scientists monitoring the lake’s water clarity from boat measurements obtained since 1965 have discovered that the lake along the California-Nevada border has lost more than one foot of visibility each year. Details of the study can be found in the Lake Tahoe Watershed Assessment, a review of scientific information about the lake undertaken at the request of President Clinton and published in February 2000. The most likely causes are increases in algal growth, sediment washed in from surrounding areas, and urban growth and development.

By combining historical and current ground-based measurements with space measurements from new instruments like ASTER, scientists are now continuously monitoring and gaining a better understanding of the circulation patterns and changes in Lake Tahoe’s water clarity. Images like these from satellites, which are able to capture entire views of the lake and its 63 contributing streams, can be used to determine and monitor spatial variations in the lake’s clarity over time. These images complement ’point’ measurements, made by boats from one spot in the lake. Rafts and buoys verify the satellite images, and they help scientists develop and test circulation models.