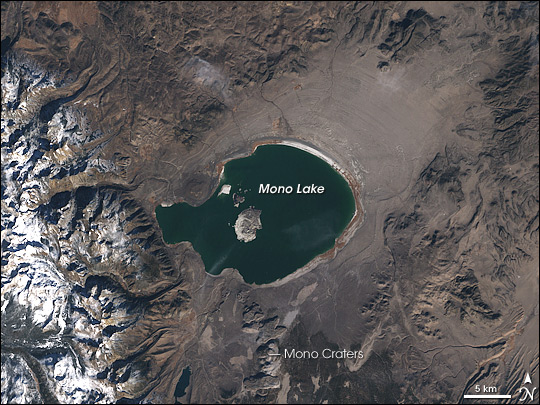 In eastern California, along the western edge of the Great Basin—one of North America’s four largest deserts—sits Mono Lake. This salty remnant of a wetter era resides in a landscape of geologically young and potentially active volcanoes.

On December 16, 1999, NASA’s Landsat 7 satellite captured this image of Mono Lake and its surroundings. The area immediately around the lake is relatively flat, especially in the northeast. On all sides of the lake, however, the terrain is rugged, especially the snowcapped mountain ridges in the west. Aside from the white snowcaps, the landscape limits its color palette to earthen tones with very little green. Although the nearby mountains can sport some vegetation in the summertime, this area is quite arid.

South of the lake appear some of the geologic features known as Mono Craters. Running along a roughly 16-kilometer (10-mile) north-south expanse, the Mono Craters may resemble old, dead volcanoes, but they are actually plug volcanoes—volcanoes whose previous lava flows cooled, hardened, and formed domes over the vents. Geologists estimate that the Mono Craters are less than 40,000 years old, and one or more of them could erupt in the future.

Drilling for oil on one of the lake’s islands enabled geologists to sample volcanic ash deposits and infer the age of Mono Lake. They estimated that the lake existed for at least 760,000 years and possibly much longer. Now surrounded by mountain ranges, however, Mono Lake has no outlet; water entering the lake can only evaporate away. The water that evaporates leaves behind salts and other chemicals, so like Great Salt Lake, Mono Lake is saltier than the ocean, and its salinity varies with its water level. Besides salty, the lake is also “soapy” with a pH value about equal to that of household glass cleaner. Although humans wouldn't want to drink the water, some migratory birds find the lake appealing, and Mono Lake provides nesting habitat for California gulls.

Beginning in 1941, water diversions from the lake lowered its water level. Some evidence of the dropped water level appears in this image, in the off-white edging surrounding much of the lake. Although too small to appear in a satellite image, some features of the lakebed became apparent after water diversions. Tufa towers dot the perimeter of the lake, especially along its southern shore. Formed by the chemical interaction of calcium-rich springs and carbonate waters in the lake, these towers formed well below the lake’s surface, only to rise above it later, after water was diverted.